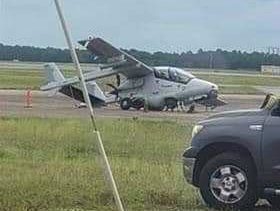 The aircraft on 9 July suffered minor damage to its landing gear, and according to a Leidos spokesperson who told Aviation Week, the damage occurred “during a preventative maintenance action.” Leidos didn’t specify if it was due to human error or a technical problem was responsible, although it could be a combination of both.

“We are working with the customer to complete the necessary inspection and continue showcasing the advanced capabilities of this aircraft,” the Leidos spokesperson said. The Bronco II aircraft will likely be flying again in the next few days.

The Bronco II a variant of the Advanced High-Performance Reconnaissance Light Aircraft (AHRLAC), is a light reconnaissance and counter-insurgency aircraft made by AHRLAC Holdings, a joint venture between the Paramount Group and Aerosud in South Africa.

The Bronco II came to the spotlight recently when it was selected by the United States Special Operations Command (SOCOM) to participate in the Armed Overwatch flight demonstration.

The Bronco II program is being led by Leidos, Paramount USA, and Vertex, and have been awarded a total of $19.3 million for prototype demonstrations.