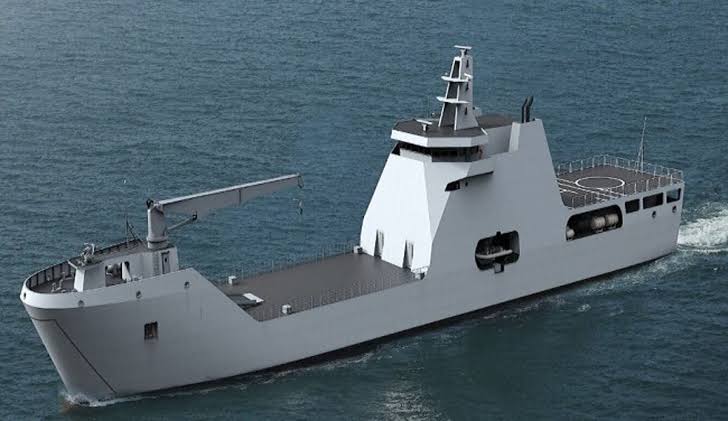 Over the last 2 years several Factory Acceptance Tests with regards to various components of the LST 100 have been jointly and successfully completed by the NN and Damen Shipyards.

The bid opening process for the procurement of the LST was held on 19 December 2017 and supervised/Damen Shipyards of the Netherlands, Anadolu Deniz of Turkey and Indian Shipyards GOA of India competed for the contract in December 2017, which was conducted by a team from the Bureau of Public Procurement as well as a technical committee of the Nigerian Navy.

The LST contract is being handled by DSNS (Damen Schelde Naval Shipbuilding) the naval shipbuilding arm of Damen shipyards and the ship is being constructed at the Damen-Albwardi Shipbuilding Yard in Sharjar in the UAE.

Nigeria’s landing ship tank will be particularly useful in projecting power in the Gulf of Guinea and in international arena. In this role, LST-100 class ship will prove useful in the transportation of troops, military hardware, vehicles during maritime security operations. Additionally, the new LST will provide essential sealift capabilities during periods of national emergency.

To operate properly, this landing ship will require potent air defence and naval protection which will likely come from the new general purpose frigate being acquired.

LST-100 is powered by two Caterpillar/Cat 3516 C-rating engines and 4 Caterpillar C-18 generators, delivering an endurance of 15 days at 15 knots.

In humanitarian missions or evacuation, the vessel can accommodate over 450 persons on its upper and lower decks.