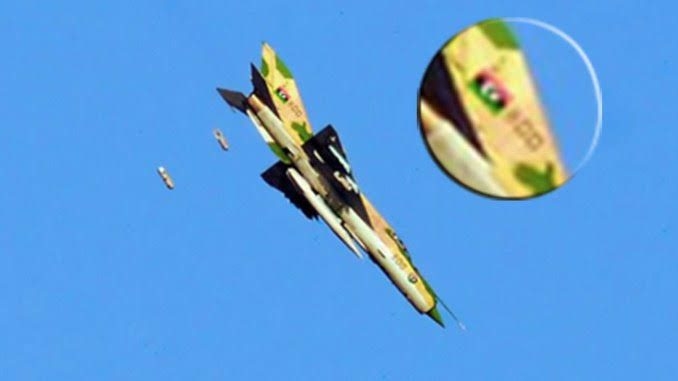 A MiG-21 ‘Fishbed’ fighter jet of the Libyan National Army crashed on Saturday during a military parade in Benghazi, killing the pilot.

On Friday, LNA spokesman Ahmed al-Mismari said that the planned parade on a military base of Benina in Benghazi would be the largest military parade in the history of Libya.

The crash was confirmed by LNA spokesman Khalifa al-Obeidi who expressed grief over the death of Jamal ibn Amer via Facebook.

LNA’s MiG-21s was inherited from the Colonel Moamed Ghadaffi’s stock and were reportedly made airworthy and upgraded by Russia in 2019 and 2020.

The MiG-21bis, introduced in the 70s, is the backbone of the aging Libyan Air Force. In past decades the MiG-21 jets saw heavy fighting in numerous conflicts on Libyan soil, and used by both side.

The type have suffered heavy attritional losses and only a handful is remaining. According to Flight International World Air Forces directory, at least 12 airframe is available.

On 16 March 2011, pilots of one MiG-21bis and one MiG-21UM fighter jets which took off from the Ghardabiya airport defected with their planes to the opposition and landed in rebel-held air force base in Brega.

A rebel MiG-21UM crashed on 17 March 2011 was flown from Ghardabiya Air Base near Sirte to Benina by a defecting pilot the day before. Another was shot down by rebels outside of Bohadi within that period.

An LNA MiG-21bis crashed in the city of Tobruk on 2 September 2014 due to pilot error while performing in a memorial flypast for another pilot.

Another pro-LNA fighter jet, now MiG-21UM, crashed due to technical problems during takeoff for a training flight on 18 May 2016 at the Tobruk airport, pilot colonel Mohamed Rabie al-Shawa died in the crash while co-pilot captain Abdul Quader Mohamed survived.

On 29 March 2017, another pro-LNA MiG-21bis crashed at the city of Tobruk after returning from a bombing mission against Islamist positions in the town on Derna—its pilot, LNA air brigadier Saleh Joudah, the commander of the Gamal Abdel Nasser Airbase in Tobruk, was killed in the crash, along with four civilians on the ground.

Pro-LNA MiG-21bis was shot down over Al-Sabri district in Benghazi by Islamists on 17 April during a bombing raid against Islamist positions.

Another pro-LNA MiG-21 fighter jet was shot down by Islamists MANPADS over the town of Derna on 31 July 2017 during its bombing raid on Islamist positions in the town of Derna, both of its pilots ejected safely and were then captured by the Islamists.

Around 2016 and 2017, Haftar’s pro-LNA Libyan air force received dozens of MiG-21MF fighters from Egypt and UAE in addition to training, spare parts, engineers and technicians.

On 14 April 2019, pro-GNA forces shot down a pro-LNA MiG-21MF in the area of Ain Zara, Tripoli, with a Chinese-made FN-6 MANPADS, its pilot Jamal Ben Amer ejected safely and survived.