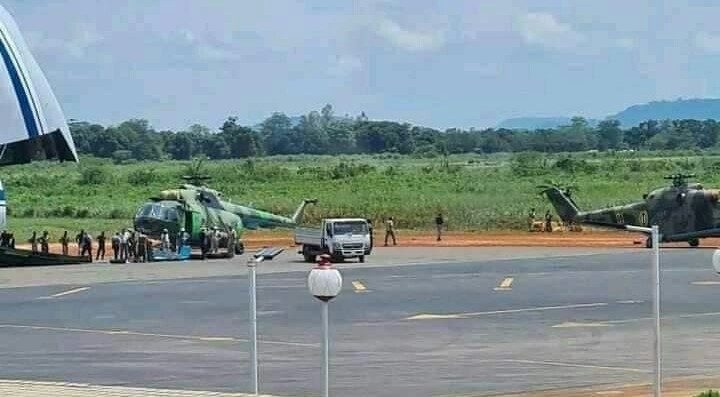 An Antonov An-124 of the Russian Aerospace Forces delivered at least one Mi-8MT and one Mi-24V helicopters to the armed forces of the Central African Republic.

Although not much is known about the quantity of military equipment delivered, as the Russian military is keeping the whole affair hushed, however, it appears to be part of a military buildup which began a couple of years ago.

These helicopters are now regularly seen around the capital Bangui, as well as the neighbouring settlements like Boali, Wuye and Gba.

The aircraft are operated by the 344th Army Aviation Centre (aircrew combat training and transition), based in Torzhok in the Tver district. This unit, among other priorities, provides air support to the Russian Special Operations Forces.

According to Radio Liberty, Russia has already deployed hundreds of troops in the country amid an alleged coup bid ahead of presidential and parliamentary elections.

In January 2, more military equipment were delivered by Russia. Russian private military contractors (Wagner Group) are in CAR providing training to CAR troops as well as VIP protection of the President Faustin-Archange Touadéra. Wagner has been known to carry out direct combat actions in support of the President’s troops.

The Central African Republic continues to suffer from the collapse of authority which resulted after the overthrow of the Bozize Government by Seleka Forces.

Since two years ago, the Russian military has deployed up to 100 military personnel to the Central African Republic in support of a United Nations mission to help stabilize the country.

A United Nations’ Arms embargo imposed on CAR prevents countries from supplying weapons and ammunition to the country without the approval of the United Nations Security Council.

Russia obtained the go-ahead from the UN Security Council to deliver arms to CAR in December 2017, when a mostly Muslim rebel coalition overthrew its then-president and prompted reprisals from Christian militias.

Negotiations are underway for Russia to construct a military base as well. Subsequently, Russia also delivered at least  10 BRDM-2 wheeled armoured reconnaissance and patrol vehicles.

MINUSCA said in a statement that the donated vehicles will assist in providing security ahead of the presidential and parliamentary elections due on December 27.

Russia’s through its interventions in CAR is trying to re-establish influence in sub-Saharan Africa. The Russian weapons and ammunition were distributed to the Presidential Guard, FACA, the police, the gendarmerie, and the Ministry of Justice.this

Meanwhile, three Mi-171Sh helicopters of the Bangladesh Air Force has been deployed to the Central African Republic (CAR) in support of the United Nations’ peacekeeping operations in the country.