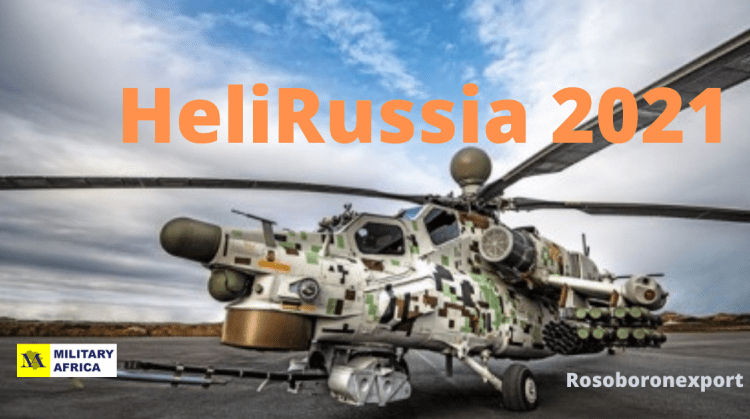 Rosoboronexport JSC (part of the Rostec State Corporation) has invited representatives of different levels from more than 50 countries to the 14th International Helicopter Industry Exhibition (HeliRussia 2021), which will be held from 20 to 22 May 2021 at the Crocus Expo International Exhibition Center in Moscow.

“Today, Russian helicopter developers and manufacturers readily meet the needs of both domestic and foreign customers, including through military-technical cooperation. Over the last 10 years alone, Rosoboronexport has offered and successfully delivered more than 850 helicopters worth about $20 billion to more than 35 countries,” Rosoboronexport Director General Alexander Mikheev said.

During HeliRussia 2021, Rosoboronexport will offer its partners, as well as potential new customers, Russian helicopters suitable for meeting a wide range of challenges in various physical, geographical and climatic conditions.

Various military helicopters, as well as a number of civilian models, which can also be delivered through Rosoboronexport, will be on display at the Company’s stand and at the manufacturers’ stands.

At its stand, Rosoboronexport will showcase a scaled model of the Ka-52 scout/attack helicopter, a leader among attack helicopters, which has proven its high capabilities and performance in actual combat during the Russian Air Force’s anti-terrorist operation in Syria.

The Ka-52, equipped with state-of-the-art avionics and powerful weapons, is fully compliant with the reconnaissance-strike warfare concept, combining the functions of attack, reconnaissance and command helicopters.

This helicopter has excellent flight performance and, thanks to its coaxial rotor system, can perform new types of maneuver, including “funnel” and “flat turn”, thus enabling it to highly effectively engage moving targets in their least protected areas. The Ka-52 is the world’s only helicopter equipped with an ejection escape system.

“In the near future, we and our foreign partners expect the launch of an upgraded version of the Ka-52, which is being developed by Russian Helicopters, to the world market,” Alexander Mikheev said.

Traditionally, visitors to Rosoboronexport’s stand will also be able to get acquainted with scaled models of the Mi-35M transport/attack helicopter and the Mi-17V-5 military transport helicopter, which are among the most popular with foreign customers, including due to their easy maintenance, high reliability and mission flexibility.

“Owing to its combat and operational characteristics, the Mi-17V-5 is currently the most popular among the Russian military helicopters delivered abroad over the past decade. Rosoboronexport has delivered more than 270 these flying machines to foreign customers,” said Alexander Mikheev.

In addition to effectively performing fire missions, the Mi-35M helicopter is the world’s only multipurpose attack helicopter capable of transporting up to 8 troops with weapons, up to 1,500 kg of ammunition or other cargo inside the cargo cabin, as well as up to 2,400 kg on external sling, and evacuating casualties.

Rosoboronexport will also provide advertising materials for the Mi-26T2 heavy-lift helicopter which has the highest load-carrying capacity among all existing helicopters in the world, the upgraded Ka-32A11M multi-purpose helicopter, and the Ka-226T and Ansat light multi-purpose helicopters. These helicopters can be effectively used by both civil ministries, departments or private companies and law enforcement agencies. They are equipped with modern on-board equipment to meet the increasing customers’ requirements and needs.

In addition to helicopters, Rosoboronexport will present a wide range of unmanned aircraft systems with Russian-made UAVs for export.

During the exhibition, the Company is ready to discuss with representatives of partner countries both the supply of final Russian-made products, as well as technology partnership issues, the construction of service and training centers for training flight and maintenance personnel.