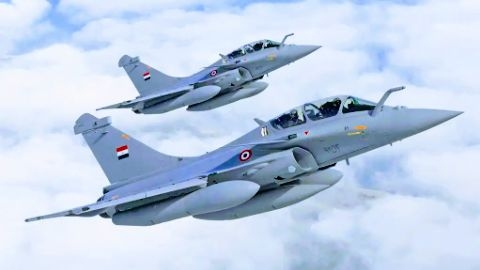 Egypt has reached an agreement with France for the purchase of 30 additional Rafale fighter jets worth 3.75 billion euro ($4.5 billion) according to statements issued on Tuesday by the Egyptian and French defense ministries as well as Dassault Aviation, the aircrafts manufacturer.

The new Rafale aircraft will complements the 24 Rafales acquired six years ago, thereby bringing the total number of Rafales in the Egyptian Air Force to 54.

Eighteen single-seat models of the Rafale and 12 twin-seaters are to be delivered between 2024 and 2026, according to the French defence ministry.

Egypt is the world’s third-biggest arms importer after Saudi Arabia and India, according to the Stockholm International Peace Research Institute.

The deal also includes a €240 million contract for buying equipment and munitions package from Safran Electronics and Defense as well as with missile-maker MBDA, and Egypt’s defense ministry disclosed that the deal would be financed through a loan spanning over at least 10 years.

Eric Trappier, CEO of Dassault Aviation, said: “This new order is proof of the unfailing bond that unites Egypt, the first foreign user of the Rafale, as it was for the Mirage 2000, with Dassault Aviation for nearly 50 years. It is also a tribute to the Rafales operational quality.”

The first aircraft of this new contract will be delivered within the next three years and Egyptian officials were expected at the French Ministry for the Economy and Finance on Tuesday to sign the deal.

Florence Parly, the French armed force minister, said in a statement that the new deal “reinforces the strategic and military partnership between France and Egypt.”

She added that “this contract illustrates the strategic nature of the partnership that France maintains with Egypt, while our two countries are resolutely committed to the fight against terrorism and are working for stability in their regional environment.”

According to Disclose investigative website, financing for the deal would be up to 85% guaranteed by the French state with BNP Paribas SA, Credit Agricole, Societe Generale and CIC, which funded the original deal.

This new deal has drawn criticism from various Human Rights organizations which have accused France of supporting violations of freedoms by Sisi’s government.

French officials dismiss this, saying Paris is following a policy of not openly criticising countries over human rights so as to be more effective in private on a case-by-case basis.

A similar mega deal with Italy failed to materialize fully due to the same human rights claims. In this deal, if successful would have seen Egypt supplied with two Bergamini-class fridate, Spartaco Schergat and Emilio Bianchi for an estimated EUR1.2 billion (USD1.3 billion), both vessels have been delivered.

Additionally, 20 corvettes based on the Falaj class that Fincantieri built for the United Arab Emirates, 24 Eurofighter Typhoon multirole jets, 24 M346 jet trainers, and a surveillance satellite are part of the deal.

Meanwhile, the Egyptian Air Force is in the market for new advanced trainer aircraft to prepare it’s pilots for the Rafale and Russian-made Sukhoi Su-35 multirole aircraft.

In November last year, Leonardo disclosed that it has received a firm order for its M-346 jet trainer and combat aircraft, however, the company did not reveal the customer or the value of the deal.