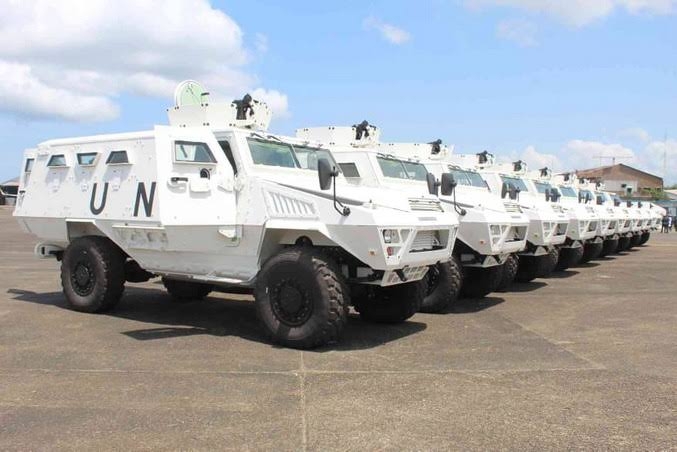 The new equipment delivery which arrived on Tuesday 11 May, will be used by its troops taking part in peacekeeping efforts in the neighbouring Central African Republic (CAR).

Defence Minister Delegate Joseph Beti Assomo officially received the equipment in a ceremony at the 201 Airbase in Douala.

French Groupe OMP Solutions, is the procurement company for the new equipment, with funds from the government of Cameroon. Apparently, about 70% of the equipment have arrived in the country, with more expected soon.

A total of 33 Bastion vehicles are expected, General Dominique Trinquand, an official of OMP Solutions,

More than 1000 Cameroonian peacekeepers are in the Central African Republic, under the umbrella of the United Nations Multidimensional Integrated Stabilisation Mission (MINUSCA). They are deployed in three CAR towns namely, Bossangoa, Bouar and the capital Bangui.

“In order to honour Cameroon’s commitment to the international community, particularly the UN peacekeeping operations in the Central African Republic, the Head of State, Commander-in-Chief of the Armed Forces [Paul Biya], decided to renew the entire equipment pool of the Cameroonian contingent deployed to MINUSCA,” Assomo said.

“In the CAR theatre, it became crucial to replace our equipment – most of which had reached the end of their life cycle – due to wear and tear as well as the constraints of rough operational environments and uninterrupted use. It was also imperative to comply with the new UN guideline which requires the establishment of a second mechanized company of the infantry battalion to increase the operational capabilities of our entire contingent and to improve the living and working conditions of our soldiers,” he added.

Cameroon is currently fighting the Ambazonian Defense Force, a separatist movement, and has received several consignment of weapons in the past few years.

The Chinese government signed a military assistance agreement with Cameroon four years ago, comprising of a donation of CFA4.5 million (USD8 million) to Cameroon’s military for the purchase of military equipment.

Subsequently, in September 2019, Cameroon received a large consignment of weapons from China, part of a Chinese-Cameroon military assistance agreement which was signed in 2018.

The weapons which were transported by dozens of trucks via the Douala port to Buea and Bamenda was provided to assist Paul Biya in dislodging the separatist forces.

The new vehicles were deployed with the country’s elite Rapid Intervention Battalions (BIR) for use in counter-insurgency deployment in urban areas of the southwest and northwest region, (Operation ‘Chacal’ (Jackal)).

Cameroon’s Rapid Intervention Battalions (BIR) received 15 Bastions (known locally as Cyclones) in late 2017 and deployed them to the Far North for operations against Boko Haram militants.

Cameroon is confronted by multiple threats such as the Ambazonian insurgency in the Anglophone west and Boko Haram Islamist militants in its far Northern region.

The country have been accused of severe human rights violations by Human Rights Watch, this has led the United States to withdraw its military assistance to the country.