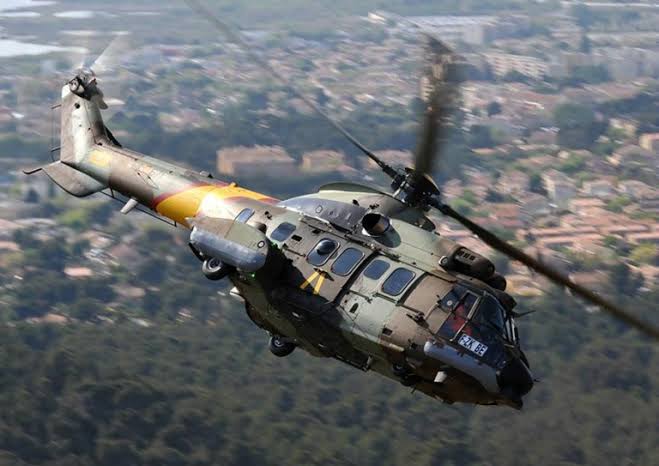 The new H215 helicopter -an upgraded version of the ageing Eurocopter AS-532UL Cougar arrived Harare the capital aboard an Antonov An-124 heavy-lift transport aircraft that took off from the Rzeszow-Jaslonka International Airport in Poland on 17 April.

The An-124 transport aircraft landed at Robert Mugabe International Airport on 18 April.

It is expected that the new aircraft would replace the aging Cougar currently used to fly President Emmerson Mnangagwa as the flagship of the presidential fleet.

With funds low, Zimbabwe has been finding it difficult to replace its obsolete and vastly outdated aircraft fleet.

The United States and the European Union (EU) have both maintained sanctions, citing a lack of progress in democratic and human rights reforms as well as restrictions on press freedoms.

These economic crises has forced the Zimbabwean government to operate poorly maintained equipment.

In April 24, an Air Force of Zimbabwe Agusta Bell 412 (AB 412) helicopter crashed on Friday, 23 April killing three crew members and a child on the ground as it came down on a house.

Also, a SIAI-Marchetti SF260 trainer aircraft belonging to the Air Force of Zimbabwe (AFZ) crashed in a compound in Somabhula, about 24 km south-west of Gweru, near the central city of Gweru, killing both pilots last year December.

The H215’s large interior accommodates 19 passengers comfortably or up to 22 troops, making it ideal for passenger transport. It can also be used for executive and VIP transport, with up to 12 seats, and as a corporate shuttle.