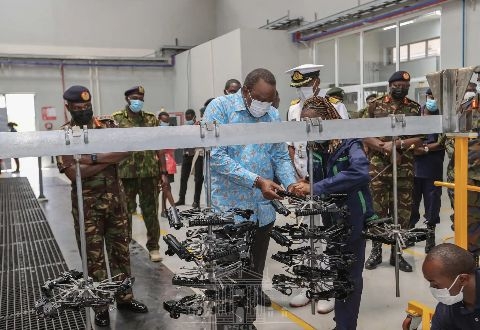 The Kenyan military is set to receive a significant boost in it’s operations as the country opens a fully indigenous small arms production factory.

Speaking at the ceremony, the President Kenyatta said that a country’s production of weapons is a way towards self reliance, innovation and strengthen local manufacturing capabilities.

The President said through the local production of weaponry, Kenya seeks to enhance self-reliance, domestic innovation, and strengthening of local manufacturing capabilities, while offering decent jobs for her youth.

The President continued by saying the plant is also in line with the government Big Four agenda, as well as the Kenya Vision 2030.

“Covid-19 has taught us that international supply chains are vulnerable to disruption. We add another arrow to our security quiver. This sets stage for the progressive domestic manufacture of security equipment used by our nation,”

“Over the next year, we intend to diversify to include 9 mm pistols and 7.62 assault riffles,”

“By venturing into this, we seek self reliance and strengthening of local capabilities and offering decent jobs for our youths,”

“The journey will not be an easy one. It needs investment of money, training and building equipment,”

The new factory was developed at a cost of Kshs 4 billion and has an annual single-shift manufacturing capacity of 12,000 assault rifles with 60% of components being locally manufactured.

This latest move is hailed across the country as Kenya is at the forefront in the battle against jihadists in the region.

For decades, Kenya has been witnessing attacks from Al-Shabab, ever since it sent troops into Somalia to assist the African Union mission mandated to protect Somalia’s government and population from the militant threat.

A deadly January 15, 2019 attack on a hotel in Nairobi, Kenya is attributed to al-Shabaab.

On January 2, 2020, three passengers on a bus in Lamu County, Kenya, were killed by al-Shabaab insurgents.

On January 5, 2020, one United States service member and two contractors were killed during an al-Shabaab attack on the Kenya Defense Forces’ Manda Bay Airfield at Camp Simba in Lamu County, Kenya.

Two United States Department of Defense workers were injured during the attack and two airplanes, two helicopters, and multiple American vehicles were destroyed.

Following the January 5 attack, additional United States assets of the East Africa Response Force (EARF) were deployed from Camp Lemonnier, Djibouti to secure the Manda Bay Base and augment security.

A Kenyan made CMZ-4 assault rifle unveiled by President Uhuru Kenyatta are being used by the KDF 10th Battle group (10BG) in Somalia.

The CMZ 4 assault rifle was designed by young Kenyans recruited with the help of the National Intelligence Service (NIS) from universities.

Kenya already operates a nascent arms industry. The Kenya Ordnance Factories Corporation (KOFC), established in 1997 under the Ministry of State for Defense, was the only Government-owned weapons factory.