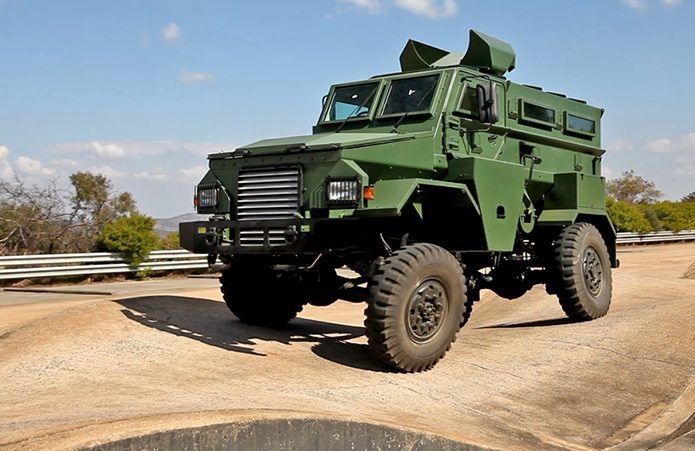 OTT Technologies will be working with US defence contractor PAE to deliver twenty-five Puma M26 Mine Resistance and Ambush Protected (MRAP) vehicles to the Burkinabe Army.

The new vehicles will be used in the fight against terrorism, as well as in the protection of Burkinabe troops on the frontline. The United States and the Burkinabe Army will also collaborate on training to improve troops response to Improvised Explosive Devices (IED) attacks now prevalent in the country.

OTT Technologies (Pty) Ltd (OTT) a South African company located outside Pretoria, the company specialises in the refurbishment of surplus ex-military combat vehicles, and also designs and manufactures of new wheeled armoured and mine protected vehicles.

One of its products, the Puma M26 4×4 Mine and Blast Protected Vehicle (MRAP) features a V-shaped hull for increased mine and IED protection. It is built on a commercial truck driveline, and can be used by military, police and security companies during peace keeping, homeland security and other asymmetric warfare operations.

Recently, the Puma M26 armoured vehicle has evolved into a new variant, a larger Puma M36 Mine and Blast Protected Vehicle (MRAP).

The new Puma APC is also built on a commercial truck driveline. The Puma family consists of an APC without armament, APC Patrol with a light manual turret, command vehicle, ambulance with 4 stretcher patients and 6×6 recovery vehicle all sharing the same automotive components.

For a long time, Burkina Faso has been a regular recipient of military equipment from various countries. For instance, in May 2019, Burkina Faso received 24 Storm 4×4 APC from Qatar.

According to the Qatari Government, the donation was part of the country’s efforts, to contribute to support the peace process and laying the foundations for stability in Burkina Faso.

While in June 2019 Ukraine’s AutoKrAZ in a contract valued at $1.2 million delivered three Shrek-M armoured vehicles to Burkina Faso. The Shrek-M vehicles delivered to Burkina Faso have been outfitted with mine disposal equipment include a manipulator arm with a six metre reach. It can lift up to 300 kg and dig and grab suspicious objects. The arm is controlled remotely from inside the vehicle with the assistance of a video monitor.

The Cobra APCs are operated by the Commando Infantry Regiments (RIC), an elite unit on the Burkinabe Army.