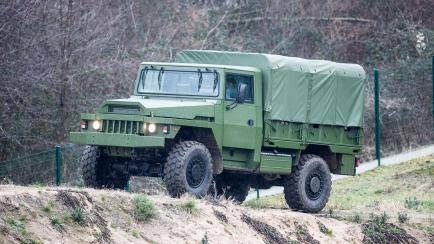 Designed and developed by the French company ACMAT now part of ARQUUS, formerly Renault Truck Defense. The VLRA was unveiled in 2012 during the defense exhibition Eurosatory in Paris, France.

The chassis features several proven capabilities, including sharing the high ground clearance and a full time all wheel drive (AWD) system. It can handle a payload between 2 and 4.5 tons or up to 17 military personnel.

The VLRA 2 is optimised for special operations, and offers ballistics protection up to Level 4 NATO standard, landmine protection (Levels 2A and 2B) as well as mine protection.

“VLRA is already in service in numerous countries across the world and is employed in the most demanding theaters of operations,” the group said on the vehicles.

Compared with the VLRA1, the new vehicle is heavier, has a larger cargo capacity. The vehicle by a EURO 5 emissions compliant diesel engine coupled to a six-speed ZF manual or five-speed automatic gearbox. It has a maximum cruising range of 1,400 km and can reach a top speed of 110 km/h. There’s a cargo area at the rear of the vehicle.

The new VLRA can be armed with different types of small weapons including 7.62 or 12.7mm machine guns as well as 40mm automatic grenade launcher or air defense missile system.

In recent times, Morroco has becomes a major customers of the French Defense Industry as part of its plan to strengthen its military equipment and mobilization capabilities.

Morocco imports 9.2% of arms from France, according to a recent report from the Stockholm International Peace Research Institute (SIPRI.)