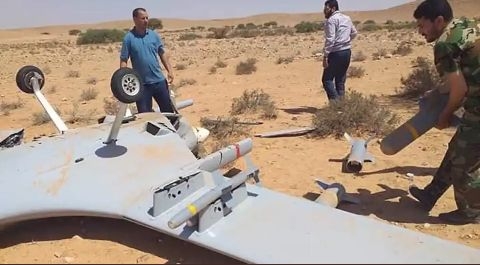 Forces of the Government of National Accord (GNA) are still losing the Turkish-made the Bayraktar TB2 armed drone, even with the lull in fighting.

A Bayraktar TB2 armed drone was shot down yesterday, 28 February in the northern part of Libya by Khalifa Haftar’s Libyan National Army (LNA). The Bayraktar TB2 drone was returning from an armed reconnaissance mission when it was brought down.

Photographs of the downed drone were published on Social media. At least six guided munitions were still attached to the downed UAV which was being detached and transported by LNA forces.

Bayraktar TB2 armed drones rose to prominence last year after it was used with devastating effect against the Russian made Pantsir S1 air defence systems in both Libya and Syria.

Several of the Russian made UAE-operated Pantsir air defence systems were destroyed, giving the United Nations’ recognized government in Tripoli – the Government of National Accord battlefield advantage.

However, this battlefield advantage came at a huge cost, at least 16 Bayraktar TB2 drones operated by Turkey on behalf of the UN-backed Government of National Accord (GNA) have been lost. This is against 8 Wing Loongs UCAVs operated by the United Arab Emirates (UAE) on behalf of Khalifa Haftar’s Libyan National Army.

Although, both sides, on at least one occasion, have shot down their own drones by mistake. The massive drone operation in Libya is considered as the largest drones’ war in history.

Last year February, a Bayraktar TB2 UAV was brought down using a Pantsir S1 Air Defence missile system in the south of Tripoli.

The TB2 Bayraktar UAV was conducting offensive operations in support of the GNA.

The GNA received 12 Bayraktar TB2s in two batches between May and July, 2019. At least half of them have been destroyed by UAE-LNA airstrikes using Wing Loong IIs UCAVs. UAE then supplied an unknown number of the drone type as a replacement for those lost.