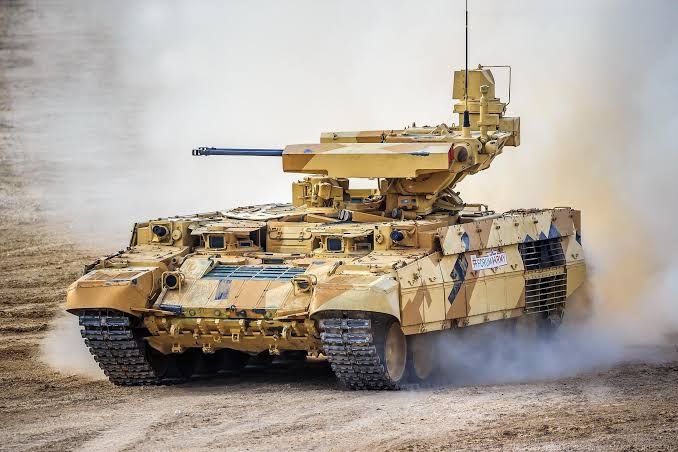 The contract was signed in April 2016, with the deliveries starting in the first quarter of 2018 and continue until the end of 2019. In July last year, images posted on social media revealed that the first BMPT-72 “Terminator” fire support vehicles had arrived in Algeria.

The BMPT-72 Terminator 2 is a armoured combat support tracked armored vehicle is designed to provide heavy fire support to maneovering main battle tanks on the frontal edge of the battlefield. The vehicle is designed by the company Uralvagonzavod and was unveiled for the first time to the public at the Russian Arms Expo 2013 defense exhibition in Nizhny Tagil (Russia).

Fully based on the chassis of the T-7 main battle tank, the BMPT-72 vehicle offer superior protection and firepower, especially in urban operations as well as anti-tank warfare.

With it’s main armament of the BMPT-72 consisting of two 30mm automatic guns 2A42 and one PKTM 7.62mm coaxial machine gun which can be used against light armored vehicles and manpower, par Algerian Army’s order of battle doctrine, it will escort the troops-carrier Boxer infantry fighting vehicles, upgraded BTR-80 armoured fighting vehicles, as well as the indigenous FUCH 2 6×6 armoured personnel carrier.

The machine guns of the BMPT-72 combat support vehicles can fire a wide range of ammunitions such as APERS-T (Anti-Personnel ammunitions), HEF-I (High-explosive Fragmentation Incendiary), AP-T (Armour Piercing)., and KE (Kinetic Energy). Two anti-tank guided missile Ataka-T launcher units are mounted to each side of the turret. The anti-tank missile can engage a target up to a maximum distance of 6,000 m while the guns have a maximum range of 2,500 against light armored vehicles and 4,000 against light tactical vehicles and troops.

The BMPT-72 or Terminator 2 has a crew of three including a driver, commander, and gunner. The hull and turret of the BMPT-72 are made of steel armor and integrates the latest protection systems with explosive reactive armor (ERA) to the front of the turret, a detachable ERA module on the glacis plate, and applique ERA on the sides of the hull and turret.

According to Russian defense industry information, the BMPT-72 can be motorized with two types of engine, the original 850 hp B84MC or the new 1000 hp. B92C2 power plants, both are 12 cylinder V type multi-fuel, liquid-cooled Diesel engines. It can reach a maximum road speed of 60 km with a maximum cursing range of 500 km.

The BMPT-72 or Terminator 2 is fitted with an advanced automatic fire control system which can be used for terrain observation, target location, and detection on the move at day and night. A laser range finder is also available. The commander and the gunner of the BMPT-72 are equipped with control panels and LCD screen.