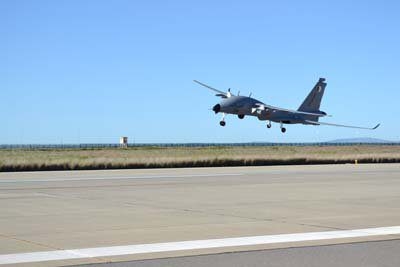 In 2016, Nigerian military disclosed that it had acquired Yabhon Flash-20 UAVs to replace the CH-3 armed UAVs, and complement its other drones. However, since then there have not been any indication that Nigeria took delivery of the UAV until 8 recently.

Photographs published on social media by the Nigerian Air Force on 8 February during a visit of the new Chief of the Air Staff (CAS), Air Vice Marshal Oladayo Amao, to the Air Task Force Headquarters in Maiduguri and the 171 Nigerian Air Force Detachment in Monguno. One of the photograph shows the tail section of a Yabhon Flash-20 UAV.

The Yabhon Flash 20 UAV was slated to replace the CH-3 combat drone armed with AR-1 missile in service, however, several other UAVs including Wing Loong II, CH-4, PD-1, Aerosonde VTOL UAV has since been introduced into service.

Weighing about 1.5 tonnes maximum take-off weight, the Yabhon Flash 20 is the smallest of Adcom Systems’ UAVs. It can stay airborne for 60-70 hours and is equipped with a gimbaled camera platform.

Yabhon UAVs are also in service with the Algerian military, locally built and called the El Djazair 55 (Algeria 55) and the Yabhon United 40 (named locally as ‘Algeria 54’). They were observed in an Algerian Ministry of Defense (MOD) video footage on the national TV released in 25 December 2018 armed with mortar rounds, and conducting counter terror strike.

Both the Yabhon United 40 and Yabhon Flash 20 are similar in configuration, but differ in size.

Two Wing Loong II and two CH-4 was deployed in Gusau, two in Gombe and the remaining two to support the ongoing Operation Lafiya Dole

Nigeria also has Aerostar UAVs and some indigenous designs in service such as the Gulma, Tsaigumi, Amebo, and Ichoku hand-launched mini-uav.