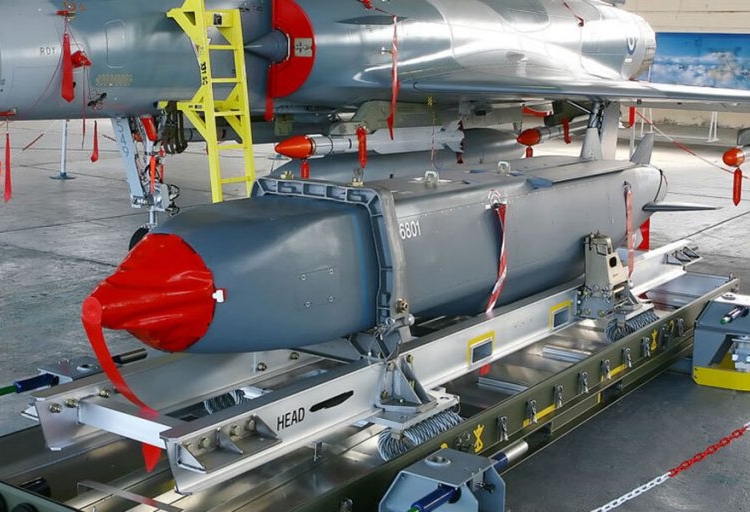 The footage showing the MBDA SCALP cruise missile first appeared in an Egyptian military media in 2 February, during a joint exercise with the French Air Force.

The hangar appeared to be at Gebel el-Basur Air Base, where the both French and Egypt’s Rafales and Mirage 2000s that took part in the exercise was based.

The SCALP cruise missile was part of the weapons Egypt received with its 24 Rafales.

Although, French media at that time reported that the United States attempted to block the sale due to US-controlled technology in the missile.

Also at the time, France explored options for exporting the SCALP missile to Egypt including the possibility of replacing American components with alternatives.

French Defence Minister Florence Parly said in the country’s National Assembly that the decision by the United States to use the International Trade in Arms Regulation (ITAR) agreement to block the sale of Scalp missiles to Egypt could be circumvented if domestically-built parts are used instead.

“In this case, we will not be able to lift the US opposition to the sale of Scalp missiles.

“The only thing we can do is for MBDA [which makes the missiles] to make some investment in research and development to be able to manufacture similar components that are not covered by ITAR,” Parly said in 2018.

“We can do it for the Egyptian Scalp/Rafale in so far as the new missile can be built with a reasonable delay, though the customer might find this delay a bit too long.”

“It is true that we depend on this [US International Traffic in Arms Regulations] mechanism: We are at the mercy of the Americans when our equipment is concerned,” she said. Because the United States will not lift its opposition to the sale of Scalp missiles, France has had to come up with alternatives.

French President Emmanual Macron broached the SCALP issue during his visit to the United States in April 2018.
The impasse with the United States regarding the SCALP cruise missile was apparently resolved, with France receiving Washington’s nod to export Scalp missiles as well as additional Rafales to Egypt in July 2018.

The requisite export licences to bypass the US International Traffic in Arms Regulations (ITAR) rules which prohibit sale of military equipment to certain countries which have US made components, was granted to export Rafale PODs, ITAR’s target designation nacelle to Egypt.

U.S. being a signatory of the Missile Technology Control Regime (MTCR), its is very likely that the range of Egypt’s SCALP missile is reduced below 300 km to comply with the Treaty.

The SCALP cruise missile can hold enemy high-valued infrastructure at risks, with its ability to strike vital and strategic target deep in enemy’s territory.