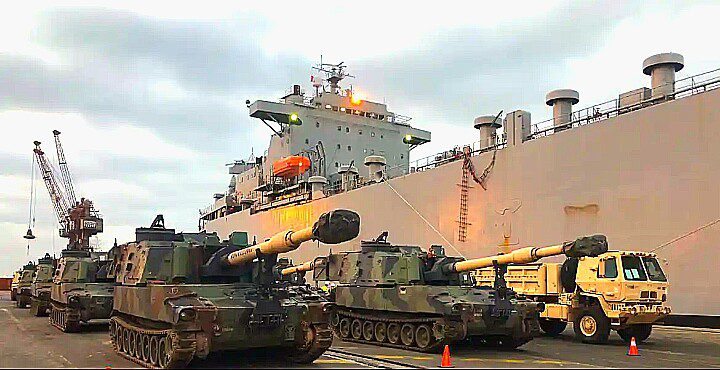 Plans have been put in place for Africa’s largest military exercise ‘Africa Lion’. Last month, militaries from U.S. and Morocco met to layout plans for the 17th episode of African Lion, scheduled for June.

Tunisia, Morocco, Senegal and Spain will host the multinational exercise, General Christopher G. Cavoli, of the U.S. Army Commander for Europe and Africa had said.
At a media teleconference, Cavoli explains that African Lion will be a good opportunity to enhance the interoperability of the military forces of the countries taking part.
The 17th African Lion exercise will include air-land, naval and air exercises, as well as medical activities for the regions populance.

“This exercise aims, essentially, to strengthen military cooperation between participating countries to respond to crises (conflicts) that may arise as well as terrorist threats to countries in the region,” he added.

African Lion was established in 2002 between U.S. Marines and the Royal Moroccan Armed Forces. The exercise has helped bring together U.S., Morocco and other nations to build interoperability, strengthen relationships and increase readiness.

African Lion is a joint, all-domain, multi-national exercise in Morocco, Tunisia, Senegal and Ghana. It aims to improve operational skills in North Africa and Southern Europe militaries and increase interoperability between U.S., African, and international partners to defend the theater from adversary military aggression.

This year’s edition of ‘African Lion 21’ was initially slated for March 23-April 3 in the Kingdom of Morocco, Tunisia, Senegal and Spain, but was cancelled due to the COVID-19 pandemic.
Last month, the United States and Morocco came together and formulated plans for the exercise. They surveyed the training areas and also put in place measures against COVID-19.

“COVID-19 presents new challenges for us as exercise planners, but we are committed to ensuring we have the best fighting force, best partners, and everything we need for strategic access and readiness,” said Colonel Robert Perry, director of training and exercises, US Southern European Task Force, Africa (SETAF-Africa).

Tunisia “a strategic military ally to the United States” will host most of the maneuvers said Major General and Deputy Commander of the U.S. Army for Europe and Africa, Andrew M. Rohling.

U.S. Africa Command increased its participation in the exercise in 2019 with the involvement of SETAF-Africa, from Vicenza, Italy.

As AFRICOM’s largest exercise, involving thousands of troops from all U.S services including guard and reserve elements, African Lion demonstrates U.S. commitment to partners in Africa.

“What we do in Africa matters,” Jackson said. “Not only are we building tactical unit readiness by deploying forces thousands of miles across the Atlantic Ocean, and rehearsing sophisticated joint, all-domain operations, we are also improving on the strong foundations of friendship between Morocco and the U.S. with an ever-increasing coalition of partners and Allies.”

The exercise scenario pits this multinational coalition against a state-sponsored and supported paramilitary force with near-peer capabilities.

“The move aimed to increase command and control effectiveness, flexibility and the ability to conduct large-scale multinational and joint exercises.” The U.S. Army stated.