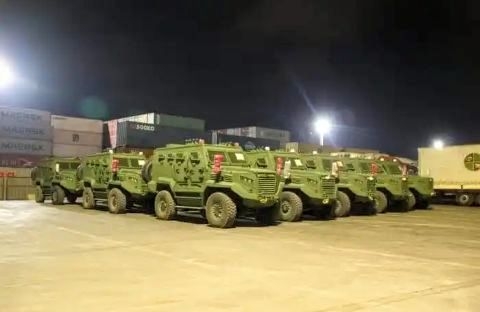 The vehicles made their first public appearance since they were delivered by Turkey in July last year.

The deal is Katmerciler’s first export order for the Hizir 4×4 armored vehicle, with delivery beginning in 2019 up till 2020.

Uganda which is set to conduct it’s election is riddled with controversy as 76-year-old President Yoweri Museveni is seeking his sixth elected term in office after 35 years in power. He faces 10 challengers, most notably Robert Kyagulanyi Ssentamu (Bobi Wine). If Museveni wins, he will be on course for 40 years in power.

Moreso, President Museveni has been accused of using violent means to intimidate his opponents, Human Rights Watch has alleged that security forces are using these regulations “as a pretext to violate rights and clamp down on the opposition and the media”.

The Hızır 4×4 armoured vehicle was designed to perform highly under conditions of intense conflict in rural and urban areas. It is powered by a Cummins six-cylinder diesel developing 400p, giving a top speed of 110 km/h and a range of 700 kilometers.

The HIZIR armored vehicle is designed with a shaped V-hull for a high level of mine and ballistic protection. It can carry up to nine fully equipped soldiers.