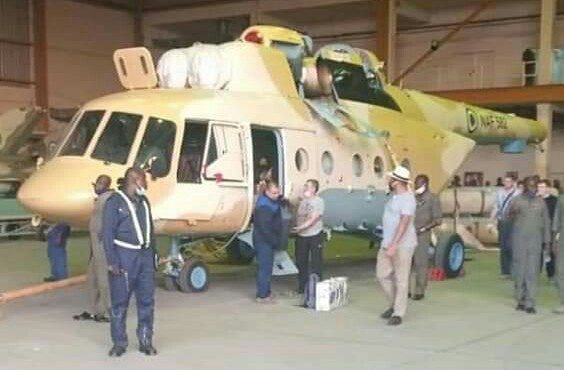 The Nigerian Air Force (NAF) on 2 December received a second Mi-171E helicopter from Serbia, to boost its counter-terrorism fight in the Northeastern region.

The new Mi-171E helicopter with registration 582 arrived at NAF Base Makurdi aboard an Ilyushin Il-76TD RA-76502 operated by Russian private charter carrier Aviacon Zitotrans, and according to open source flight tracking data, the Il-76TD flew from Kazan, Russia the facility producing the Mi-17 helicopters.

The Mi-171E arrived in knocked-down form, with several of its parts in crates, and a combined team of NAF personnel and technical support staff from the equipment vendor were also on hand to assist in offloading the new aircraft, some parts of which came in crates. In addition, officials of the Nigeria Customs Service and the Nigeria Immigration Service were present to ensure necessary documentation.

“The new aircraft will undoubtedly boost NAF’s contributions in the fight against insurgency, armed banditry and other criminal activities in the country. The newly-received aircraft will now be assembled in Makurdi by a team from the equipment vendor, assisted by NAF technicians, prior to test-flying and formal induction into the NAF.”

“The new aircraft is the second of two Mi-171E helicopters procured by the current Federal Government Administration and brings to 23 the total number of brand new aircraft acquired since 2015,” the NAF said.

Earlier this year, the Nigerian Air Force took delivery of the first Mi-171E with registration 581, which was later inducted into service on 6 February with President Muhammadu Buhari in attendance.