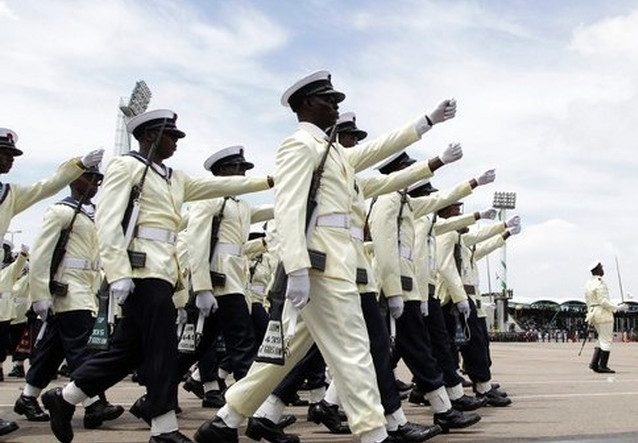 Overview of the Nigerian Navy

The Nigerian Navy is understood to be the largest in terms of manpower, as well as possessing technical superiority in the whole of West Africa and to a larger extent, the sub-saharan Africa with the exception of South Africa.

Brief history of the Nigerian Navy

The Nigerian Navy started it’s life as the now defunct Nigerian Marine in 1914, which later transitioned to the Nigerian Naval Force.
This force was at that time trained by the Royal Navy officers, and staffed by former Nigerian Marine personnel. In November 1957, HNMS Quorra was formed to train the newly recruited naval personnel, sixty junior ratings were subsequently trained for naval operations.

Two years later; in mid-1959, the Queen of England, Queen Elizabeth II allowed Nigeria to use the title ‘Royal Nigerian Navy’, this the Nigerian Navy was formed. The name was later changed officially to the Nigerian Navy in 1963 immediately after Nigeria became a Republic.

Since then, the Nigerian Navy have grown in both numbers, sophistication, and technical proficiency to meet with today’s maritime challenges.

As with other branches if the Nigerian military, the Nigerian Navy’s operations is guided by its command structure. This is essential in establishing a command and control which in turn guides the hierarchy.

The Chief of Naval Staff is Vice Admiral Ibok Ekwe Ibas , who was appointed on July 13, 2015, he is the most senior commissioned officer in the Nigerian Navy.

The Nigerian Navy Headquarters is currently structured into 9 Branches, 5 commands and several autonomous units. The 5 commands are:

Working alongside the five Nigerian Navy commands are seven staff branches in addition to the Office of the Navy Secretary. The branches are:

The first duties of the newly formed Nigerian Navy were simply an elaborate coast guard duties, which are;

However with time the roles were greatly expanded in 1993, to reflect a true naval force duties and enshrined in the Armed Forces Act which was later incorporated as part of the 1999 Constitution.

Thus, the current duties of the Nigerian Navy can be summed up into;

The Nigerian Navy ranks is divided into two distinct cadre, these are;

The commissioned officers for the Nigerian Navy are listed below;

Nigerian Navy salary for each ranks

Nigerian Navy salary structure is based on the ranks and educational qualification of the officers. The higher the rank, the more the salary.
Officers are also paid some extra stipends such as Hazard allowance if they are deployed on a combat or peacekeeping mission.

Salaries of commissioned officers in the Nigerian Navy;

Salaries for Non-commissioned officers in the Nigerian Navy

Navy officers also enjoy other benefits aside from the monthly salaries, such as travel, job security, career growth, and free healthcare.