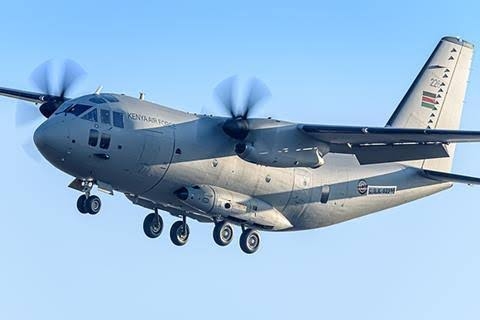 The Kenya Air Force has received its third and final C-27J Spartan transport aircraft it had ordered after delays caused by the COVID-19 pandemic.

Around March, the third C-27J was put to work ferrying essential medical supplies and equipment in Italy, and according to local sources, the aircraft was complementing local air fleet in distributing materials needed to combat the novel Coronavirus (COVID-19).
In May, the C-27J resumed test flights in Italy and arrived in Kenya at the beginning of October, where it was handed over in an official ceremony on 2 October.

The ceremony was attended by Commander of the Kenyan Air Force, Major General Francis Ogolla, and the Italian Ambassador, Alberto Pieri, according to the Italian Embassy in Kenya.

Leonardo delivered the first two C-27J Spartan tactical transport aircraft (224 and 222) to the Kenyan Air Force, both aircraft touched down at the Jomo Kenyatta International Airport from Italy on 30 January. President Uhuru Kenyatte was present during the arrival.

Kenya ordered the C-27J as well as a number of AW-139 helicopters from Leonardo in 2018, in order to boost its operational capabilities.

The two new C-27J Spartan transport aircraft was subsequently inducted on 14 February in a ceremony held at Embakasi Garrison.

The Kenyan Government apparently took a loan from Italy’s Unicredit SpA worth Sh20 billion ($198 million) for the three aircraft on 11 December 2017, with repayment beginning on 11 June 2019, and the loan maturing a decade later.

Kenya is the fourth African nation to order the C-27J after Morocco, Chad and Zambia, and the C-27Js will replace its de Havilland Canada DHC-5 Buffalos.