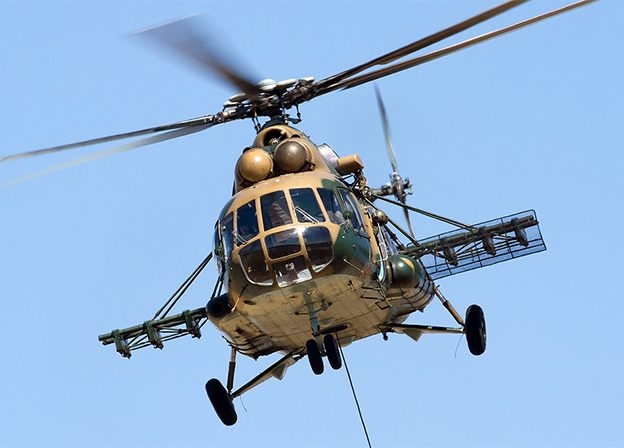 Earlier, in July the producer announced the start of the trials of the brand-new Mi-8AMTSh-VN helicopter purposefully designed for the use by the Special Forces.

The Mi-17-type helicopters along with its range of armored vehicles, particularly the Typhoon family of MRAPS are in high demand by African nations due to its ruggedness in complex terrains, says Rosoboroexport in October last year at the Russia-Africa Economic Forum.

In the event which held in Sochi, and attended by Africa’s top political and military leaders, the Mi-171Sh helicopter was showcased, attracting several interests.

So far, five Mi-8MTV-5-1 helicopters handed over to the Ministry of Defense by Kazan Helicopter plant have been equipped with advanced UV-26M defense system and L-370 electronic warfare system, according to a recent press release statement by Russian Helicopters press-release.

The statement reveals that the cockpit of the Mi-8MTV-5-1 is equipped with lighting equipment adapted for the use of night vision goggles, which allows flying in the dark at low and extremely low altitudes, as well as taking off and landing on unmarked sites.

In addition, a UV-26M is a passive jamming dispenser designed to protect aircrafts from guided missiles by jamming their guidance systems and control mechanisms with passive countermeasures is also installed. Asides its modern communication systems, the system can be operated both in manual and automatic modes, says Vympel MKB the system’s manufacturer data sheet.

The Mi-8AMTSh-VN, that entered flight tests in July, had been designed with the combat experience attained from present-day conflicts such as in Syria, Iraq, and Libya. As its main specific feature, it has two side-mounted 12.7mm forward-firing machine-guns. The cabin and the main systems are protected by the new armor made of titanium alloy. The floor of the cargo compartment and the helicopter’s sides are shielded up to the windows with the removable lightweight Kevlar armor to protect the crew. Mi-8AMTSh-VN has a digital autopilot system and an on-board defense system.
To date, there are over 900 helicopters made by Russian Helicopters’ enterprises are in use by African countries, says the company during 2019 Russia-Africa Economic Forum. More than a half of these helicopters are Мi-8/17.

To ease maintenance and logistics, Russian Helicopters have offered to Africa, its container type mobile service centers. They are designed for overhaul of Mi-8/17 type helicopters and their versions at customers’ air bases. The Russian manufacturer has also repeatedly urged the users of Russian-made helicopters to undergo servicing only at its authorized repair facilities in order to improve the safety level of the operation

In July this year, military of Niger took delivery of at least two Mil Mi-171Sh assault helicopter it ordered between 2017 to 2019, in a deal worth $47 million, making it the latest African nation to use the type.

Mozambican military received at least one new Mil Mi-17 assault helicopter from Russia, in September last year. The photograph showed an Antonov An-124-100 transport aircraft from the 224th Flight Unit of the Russian Air Force offloading the helicopter and other military hardware at the Nacala airport in northern Mozambique.

Also, as part of an ongoing rehabilitation efforts by the Equatorial Guinea, the country has received received two new Mil Mi-17 ‘Hip’ transport helicopters from Russia in October 2018, one of which has been delivered in a VIP configuration with the other being in a standard passenger configuration.