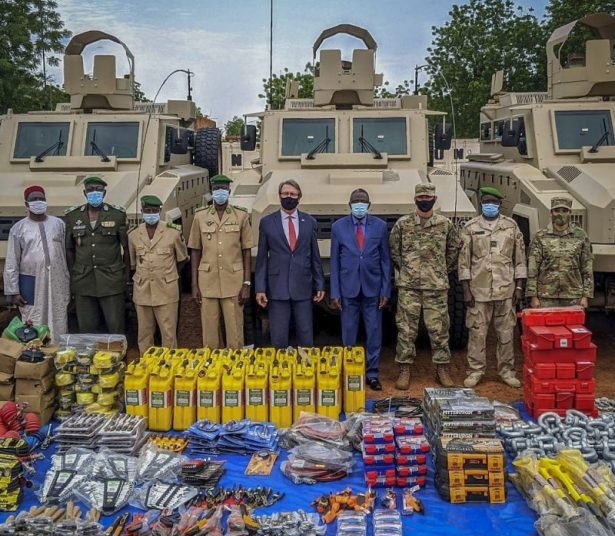 Twenty-two Osprea Mamba Mk 7 armoured vehicles worth $8 million, has been handed over to the Nigerien military by the United States as part of its efforts to support its fight against terrorism, transnational organized crime, and trafficking in the Sahel.

The US will also provide maintenance support for the equipment, since the the Mamba Mk 7 is manufactured in the United States by Osprea Logistics, although, it traces its root to the South African legacy Mamba APC.

For several years now, the Nigerian military have been receiving largess from the United States to equip the G5 Sahel force. For instance,

The United States previously handed over 13 Osprea Mambas to Niger in December 2019, also for the G5 Sahel Joint Force. The equipment, part of a $21 min Decmber last year, a $21 million donation, including 13 Mamba armoured personnel carriers ( Mamba-7s supplied by Osprea Logistics), 86 radio systems, and four Armoury Containers was handed over to Niger.

Additionally, in June this year, The US department of defense donated ten 4×4 Mercedes Atego troop transport trucks to the Nigerien Armed Forces. It has also provided a logistics warehouse as part of the donation.

After the handover, the US embassy in Niger said that the donation will enhance the FAN’s operational readiness and help further its mission to maintain peace and stability in Niger and the Sahel region.

Niger which is currently facing several security challenges including terrorism on within and outside its territory has been recipient of US equipment.

“This equipment delivery will continue efforts to grow and operationalize the G5 Sahel Joint Force as it takes great strides towards removing the scourge of violent extremism from this region,” said US Ambassador to Niger, Eric Whitaker.

The G5 Sahel Joint Force member countries are Burkina Faso, Chad, Mali, Mauritania, and Niger. The Joint Force’s missions include combating counterterrorism, transnational organized crime, and trafficking in the Sahel, a region that has seen an increase in violence since 2017.

“The US and Niger have developed a long-standing partnership that includes military training exercises as well as intelligence, surveillance, and reconnaissance support for counterterrorism activities,” Africa Command said.

“As demonstrated by our continuous support, the United States considers Niger an extremely important strategic partner, and one that is critical to the multi-national effort to defeat some of the world’s most ruthless terrorist groups,” said Whitaker.

In addition, the US has provided four medical evacuation aircraft, as well as training for Nigerien pilots and maintenance crews. Between 2013 and 2015 Niger received four Cessna 208 Caravan aircraft from the United States, with two configured for surveillance.

Those armoured vehicles and aircraft are directly supporting operations in the fight against terrorism, the US Army said.