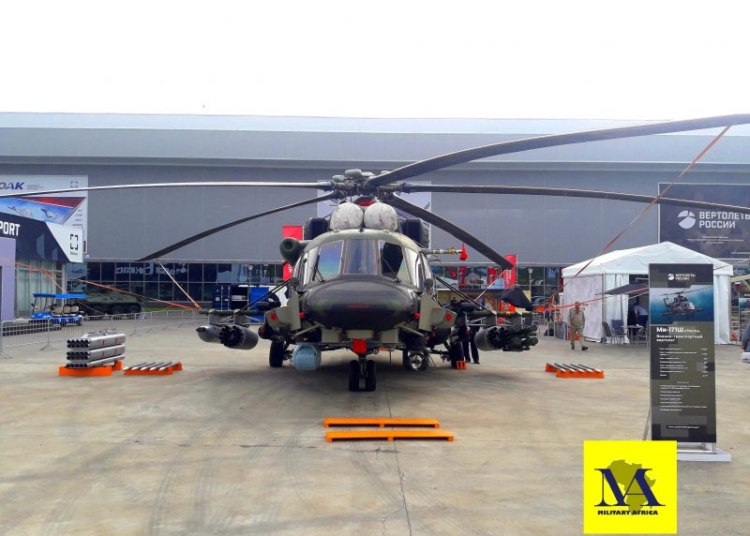 Russian Helicopters holding is showcasing the heavily upgraded Mi-35 and Mi-171Sh helicopters, also known as Mi-35P and Mi-171Sh ‘Storm’ respectively, at the ARMY 2020 Expo, currently taking place in Kubinka near Moscow since 23rd to 29th August.

Earlier, the Mi-35 and Mi-171Sh helicopters have been named by Russia as most popular military products among the customers of Africa. Just last year, the Russian Helicopters holding company announced that the modernized version of Mi-35P (Mi-35P is the export version of Mi-24P) had been offered to the African countries. The helicopter has new engines, the new sighting and navigation system, and more weapons. It can be used as a gunship, and as a troop-carrying helicopter. The Mi-35P helicopter can be used in high mountains, in hot and humid climate, day and night.

According to an announcement made at the Army 2020 Expo, Russian Helicopters, disclosed that it has started the serial production of Mi-35P.  The Mi-35P is the export version of Mi-24P helicopter, which is in service with the Russian Armed Forces. This summer Russian Ministry of Defense reported a rarely occurring tactical flight exercise, during which the night vision goggles-equipped crews of Mi-24P gunships of the Army aviation destroyed an enemy helicopter squadron in an air battle at night, in a simulated exercise,

The export-oriented Mi-171Sh ‘Storm’ with enhanced protection and attack capabilities was the premiere of ARMY 2020 Expo, attracting many interests from visiting delegate. The helicopter is equipped with ‘high-altitude’ engines of increased power, a new carrier system, including composite rotor blades with an improved profile and an X-shaped tail rotor, as well as the latest version of the President-S on-board defense system. The armor protects not only the crew and the most important units, but also the landing party in the cargo compartment. Mi-171Sh ‘Storm’ is equipped with an improved armament system, including 12.7 mm machine guns and the latest guided missile armament with the OPS-24N-1L surveillance and sighting system.

At the expo, Russian Helicopters also displayed its container-type mobile service centers, which earlier had been earlier presented to the African countries at the Russia-Africa Economic Forum in Sochi in October 2019.  They are designed for the overhaul of Mi-8/17 family helicopters at customers’ air bases. The Russian manufacturer has also earlier repeatedly urged all users of Russian-made helicopters to undergo servicing only at its authorized repair facilities in order to improve the safety level of the operation.