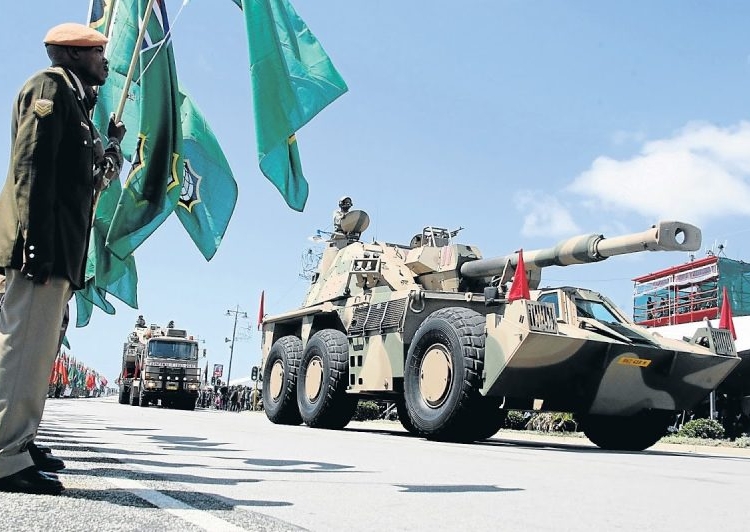 The closing day of the armed forces was held on the Port Elizabeth beach front the couler full parade was held with thousands of spectators lining the the beach front attack simulations where held with the Army, Navy and air force working together the president delivered a speech handed out medals photo FREDLIN ADRIAAN THE HERALD 21/2/2016

The day the Nigerian Navy ship NNS Andoni took to sea after several months of construction at the Nigerian Naval dockyard, quite a lot of dignitaries as well as African spectators applauded the occasion, calling it the beginning of a new era for the Nigerian defense manufacturing enterprise.

Soon after NNS Andoni took to sea, Nigeria once again dazzled the world with its new and larger warship, the NNS Karaduwa, a 45 metres seaward defense boat capable of voyages far from the shores of Nigeria.

On the landward side, over the years Nigeria has grown from a nascent military-grade manufacturer to one which can stand toe to toe with global standards, from firearms, armored vehicles to drones, and unmanned ground robots.

Nigeria’s DICON is currently in Technical Partnership with Poly-Technologies of China. Furthermore, in March 2018, DICON signed a letter of intent to the Polish Armaments Group (PGZ) for the production and technology transfer of Beryl M762 assault rifles in Nigeria.

DICON also came up with the Ezugwu MRAP was designed and developed in collaboration with Command Engineering Depot (CED), Nigeria to replace obsolete combat vehicles in the Nigerian Army’s inventory.

Other products like the Igirigi, designed and manufactured by the Nigerian Army Corps of Engineers, the Igirigi APC was first introduced to the media during the 2012 Nigeria Army Day celebrations (NADCEL), the Igirigi was built at a time when the Nigerian counter-terror operations newly began. Although, the Igirigi has ceased to be produced due to some technical shortcomings, however, it managed to secure some order from the Libyan military and is still in service till date.

The Ara has matured enough to have several variants following lessons learnt from today’s anti-terror operations. Nigeria and Chad has acquired several unit of the now proven vehicle.  First unveiled in August 2017, the Nigerian-made MRAP was even featured in AAD 2016 in a record-breaking development.

Proforce also developed the PF1, a four wheel drive APC with capacity for ten personnel, including driver and commander, and comes in several variants, including police, APC, combat surveillance, missile carrier, command and control and ambulance.

Several other indigenous defense companies has since sprung up from across the country including Epenel, a small boats manufacturing company amongst others.

The South African defense industry is beyond a doubt one of the largest in the developing world, even prompting the majot foreign countries to take notice, for instance, the US Department of Defense sent a team of specialists to study South Africa’s defense technology, and Russia, not to be left out, signed an agreement with South Africa on a joint weapons development deal.

Top on the list, is Denel, created in 1992, from the fragmented Armscor. In the fiscal year 2013, Dene’s total equity was R1.17 billion, generating a net income of R 71 million in that same period.

Some of Denel’s more notable products includes the Umkhonto vertical launched air defense missile, Mokopa anti-tank guided missile, Seeker UAV, the G6 self-propelled artillery, and G5 towed howitzer, which has the distinctive  honor of having the longest ranged in its class globally, using cutting-edge base bleed, and advanced VLAP technology, the A-Darter missile, and the Rooivalk attack helicopter.

Even though Denel has great products, and its market share is increasing, the lack of export opportunities, stunting its development and research potentials. Its inability to attract buyers even with its quality defense products is threatening its business. Resulting in a near bankruptcy in 2004. That year alone, Denel lost R358 million, adding to its rising R1 billion debt, more so, last year, it lost a staggering R1.7 million. According to defense and security expert Scott Morgan, he said in his article, South Africa: An Industry in Trouble, “it appears that there is a potential coup de grace being delivered to the [South African] [defence] industry as a whole”.

Another high achiever is Paramount Group, which was established in 1994, it produces a wide range of armoured vehicles, military aircraft, and other training equipment. For years now, Paramount Group has been expanding its business into the naval, and aerospace sector, in February 2019, it was reported that Paramount Group would sign agreement with four (up to seven is speculated) African government to establish arms production facilities. The company which has previously commissioned various manufacturing and production facilities to meet demand from specific domestic markets before, including in India, Jordan, and Kazakhstan.

Paramount Group introduced the Advanced High Performance Reconnaissance Light Aircraft (AHRLAC) in 2006. The AHRLAC is Africa’s first indigenous fixed wing military aircraft. Paramount has even gone ahead to acquire Advanced Technologies and Engineering (ATE) in 2013, as well as Aerosud, its main partner in the AHRLAC program in 2014. The military variant of the AHRLAC called the Mwari, a light combat and reconnaissance aircraft has even successfully secured a launched customer.

Another resilient company making giant stride is Rheinmetall Denel Munition – a joint venture between Denel and German defense giant Rheinmetall. The company has managed to gather a significant international customer base, insulating it from the lack of contracts from its domestic customer.

The company’s CEO, Norbert Schulze, once reported that 85% of sales were now from export customers and rising defence expenditures in regions such as Europe and Asia meant that was likely to increase to 90-95% over the next 5-6 years.

The list of Defense News Top 100 defense companies is curated from data solicited from companies, their annual reports, from analysts, research and information from the International Institute for Strategic Studies.

In this year’s list, United States Lockheed Martin predictably came on top with a revenue of $56, 606,00 million from defense business conducted in 2019 fiscal year. Boeing came second with a total defense earning of $34,300.00 million, and General Dynamics came third with $29,512.00 million in defense revenue last year.

Surprisingly, Northrop Grumman and Raytheon Company both dropped from one position from last year’s ranking.