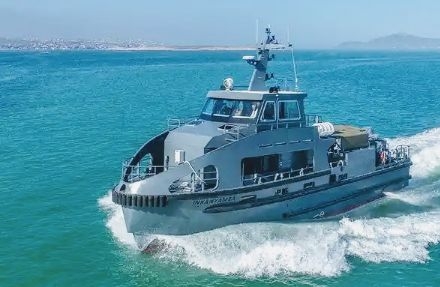 South African Special Forces have taken delivery of a 20 metres workboat from Veecraft Marine. The workboat Inkanyamba will be used to transport personnel and equipment as well as to undertake training exercises.

Inkanyamba is not the first boat supplied by Veecraft, Veecraft which is part of the Paramount Group has previously delivered vessels to the South African Navy. In May 2017, the company launched two 11 metre long workboats to support their activities on the Langebaan Lagoon.

With a service speed of 15 knots (maximum speed is 18 knots) at a deadweight load of 20 tonnes, Inkanyamba features a forward deckhouse with wheelhouse above and a 25 square metre aft cargo deck, able to accommodate 10 tonnes of cargo. The deckhouse is fitted with galley and mess areas along with two bathrooms and a deck locker accessible from the cargo deck. Four crew and 16 passengers can be accommodated. The wheelhouse is arranged for 360-degree visibility, including an unobstructed view of the cargo deck.

Inyamaba also features a robust fendering system and heavy towing bollards on each end of the vessel, Incat Crowther said.