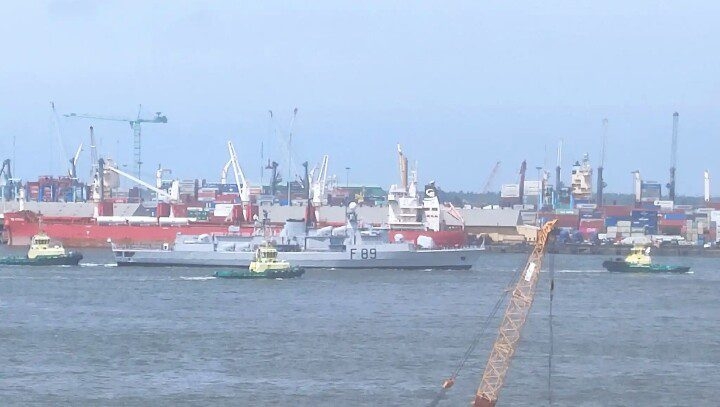 NNS Aradu (F89), a Meko 360 class multipurpose frigate of the Nigerian Navy and one of Africa’s most formidable warship has successfully undergone a refit at the Naval Dockyard limited in Victoria Island, Lagos.

The Aradu (Hausa for “Thunder”) can be easily identified as the most heavily-armed warship in service with any African nation at the time has been inoperable for several years due to lack of funding.

“We desire to have the ship at sea but as soon as the navy is properly funded, we should be able to refit that vessel and have it at sea,” he said.

The repair and overhauling began late last year at the Naval Dockyard Limited, in Victoria Island Lagos, and is been carried out by in partnership with Habtop and Dorman Long.

At the moment, Aradu is being towed to NNS Beecroft Apapa Jetty for sea trials and additional equipment fitting.

Aradu’s decline started in the 90’s as a result of the systematic dearth of training and maintenance culture of the Nigerian Navy, also compounded by financial problems brought about by falling oil prices, as well as corruption and negligence at the leadership level.

With the NNS Aradu out of action for decades, Nigeria acquired two second-hand Hamilton class OPVs from the United States, which now forms the country’s largest operational naval assets.

At her prime, NNS Aradu was capable of being armed with a wide range of armaments including anti-ship and anti-air missiles, anti-submarine torpedoes and rockets, as well as powerful naval guns.

With the age and obsolescence of her major weapons, sensors, and combat systems the ship will now undertake a new role as a combat training and offshore patrol ship.