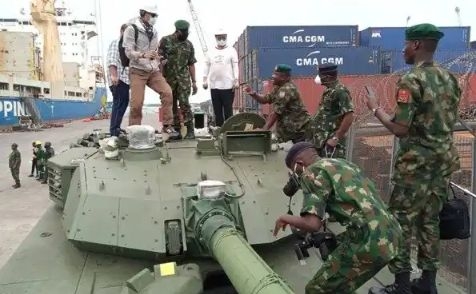 The Nigerian Army, Defence Industries Corporation of Nigeria (DICON) today 1 June, signed a Memorandum of Understanding (MOU) with the University of Ilorin to develop Composite materials for Armour plating for use in the production of militar vehicles for the nation’s military needs.

The signing which took place at the Army Headquarter in Abuja, was attended by Lt. Gen. Lamidi Adeosun, who represented the Chief of Army Staff (COAS), Lt. Gen. Tukur Yusuf Buratai.

Lt. Gen Adeosun disclosed that the collaboration between the three institutions found its roots from the Commander-in-Chief (C-in-C’s) Executive Order 005 of 2018, for the development of local content in science, engineering and technology (SET).

According to Lt. Gen. Adeosun, who is the Army Chief of Policy and Plans (COPP), the executive order is expected to promote indigenous technology that will assist in the production of both civil and military hardware.

He said: “It is in this vein, that the Nigerian Army seeks to collaborate with indigenous professionals in planning, designing and execution of projects to enhance national security.”

Adeosun, expressed confidence that the three parties involved in the MoU signing stand to benefit mutually, hence, they should painstakingly respect and implement holistically, the terms of agreements as espoused in the MoU.

Composite materials are fast finding their way into armours of modern combat vehicles, A typical vehicle armor is composed of layers made of fiber laminates, ceramics, rubbers, metals, depending on the type of threat against which it is designed to protect.

The most common type of composite armour today is Chobham armour, first developed and used by the British in the experimental FV 4211 tank, which was based on Chieftain tank components. Chobham sandwiches a layer of ceramic between two plates of steel armour, which was shown to dramatically increase the resistance to HEAT projectiles.

On the area of self-sufficiency, the Director General (DG) of DICON, Maj. Gen. Victor Ezeugwu, noted that among other benefits, the MoU will bring about a reduction in the nation’s dependency on foreign military equipment, thereby saving hard-earned foreign exchange in the country.

“It will also boost the development of indigenous capacity in research and development, especially towards attaining self-sufficiency in the production of both civil and military hardware, together with other sampling products,” he said.

In his remark at the event, Prof. Suleiman Abdulkareem Age, the Vice Chancellor (VC) of UNILORIN, assured that their university will continue to conceive potent ideas on how to improve and also improve the status of the country’s military men.

He noted that among others, the MoU will focus on the development of equipment for Command and Control, Computers, Communications, Intelligence Reconnaissance and Surveillance adding that the implementation of the MoU will reduce the nation’s dependence on foreign military procurement and save huge foreign exchange.

Major General Ezugwu commended the Chief of Army Staff, Lt. General Tukur Buratai for the initiative that led to the signing of the MoU which has been on for about two years.

Emphasizing that the partnership will focus mainly of ballistics development and others, General Ezugwu said DICON has developed its own variant of the ‘Ezugwu MRAP’ pointing out that currently, it is embarking on the production of 42 units for the Nigerian Army.

Ezugwu said the dream of DICON is to see a situation where it will be sourcing 70 per cent of local materials for the production of military hardware for the armed forces hence he was excited about the MoU.

Speaking on the advantages, he said “For instance, before the manufacturing of Ballistics Vests by DICON, the vest used to be obtained from abroad for between N250,000 to N300,000 for one unit but today, we are producing it at DICON for between N70,000 to N80,000 thereby saving the nation huge resources”.

On the MoU, Gen Ezugwu said DICON will hit the ground running noting that officials of UNILORIN were are expected to come to DICON to see its Foundry which has been upgraded to one of the best as well as the Heat and Surface Treatment facility which are of top quality, adding the DICON team will also visit the university to see areas of working collaboration.

DICON which was established by an Act of Parliament in 1964, is tasked with the responsibility to produce weapons and other equipment for the country’s Armed Forces and reduce reliance on reluctant foreign suppliers.

DICON has also signed a letter of intent to the Polish Armaments Group (PGZ) for the production and technology transfer of Beryl M762 assault rifles in Nigeria.