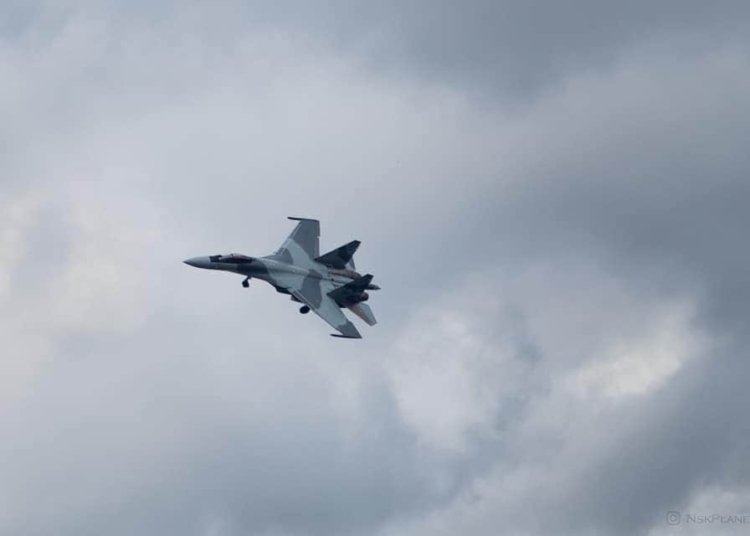 The first five Sukhoi Su-35 fighters for the Egyptian Air Force have been photographed at Novosibirsk Tolmachevo Airport enroute from the Komsomolsk-on-Amur Aircraft Plant. The five Su-35 aircraft with production serial numbers (9210, 9211, 9212, 9213, 9214) have been completed and delivery is expected to commence.

The first five Sukhoi Su-35 fighters for the Egyptian Air Force have been photographed at Novosibirsk Tolmachevo Airport en route from the Komsomolsk-on-Amur Aircraft Plant. The five Su-35 aircraft with production serial numbers (9210, 9211, 9212, 9213, 9214) has been completed and delivery is expected to commence.

Manufacture of Su-35 fighter jets for Egypt began in May this year at the JSC Sukhoi factory in Komsomolsk Sur Amour in the Russian Far East. In response to the sale, the US Defense Secretary Mark Esper and Secretary of State Mike Pompeo warned Egypt against buying Russian Su-35 fighter jets, declaring that the US could enact sanctions on Egypt through the Countering America’s Adversaries Through Sanctions Act of 2017 (CAATSA) against Egypt.

CAATSA requires the US to sanction anyone conducting transactions with the Russian intelligence and military services, including arms manufacturers. In September 2018, the US imposed sanctions on the Chinese military’s Equipment Development Department and its director for purchasing Su-35 combat aircraft and S-400 surface-to-air missile system from Russia.

The Trump administration said it was worried about what it called “Cairo’s deepening relationship with Moscow,” explaining that such a move has “alarmed” the US Government – Egypt’s long time strategic ally.

For a long time, Egypt has pursued a policy of diversification in arms procurement, for national security purposes, reaching out to countries like Germany, France, China and Spain, an indication that it is not solely looking to Russia. Egypt opted for the Russian Sukhoi Su-35 as well as French Rafale aircraft after the United States declined to sell it F-35 fighter jet.

The Su-35, is Russia’s most advanced operational fighter, where it has been flying combat missions against the Islamic State and anti-government rebels. Russian has placed orders for a total of 98 aircraft, the last of which are due for delivery later this year.

With 12 to 14 weapon hard points, the Su-35 is able to use K-77M radar-guided missiles that reportedly have a range of almost 200km. The jet is also armed with a 30mm cannon with 150 rounds for strafing or dogfighting. The Su-35 can reportedly carry up to 8,000kg of air-to-ground munitions.