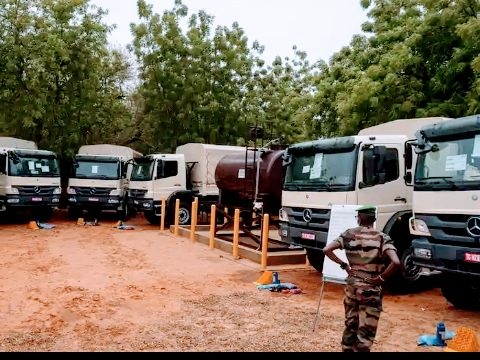 The US department of defense has donated ten 4×4 Mercedes Atego troop transport trucks to the Nigerien Armed Forces. It has also provided a logistics warehouse as part of the donation.

The donation which was delivered on May 27 will be used under the G5 Sahel Joint Force, in combating terrorism in the region.

US Ambassador Eric Whitaker attended the handing over ceremony which took at the at the Direction Centrale du Matériel, in Niger explained that the ten trucks are worth up to $1 million.

Issoufou Katambé, Niger’sMinister of National Defence, and senior military officials were present during the handover.

After the handover, the US embassy in Niger said that the donation will enhance the FAN’s operational readiness and help further its mission to maintain peace and stability in Niger and the Sahel region.

Niger which is currently facing several security challenges including terrorism on within and outside its territory has been recipient of US equipment.

In June last year, the number of mamba armoured vehicles from the United State was delivered to Niger. It composed of logistics and communications gears.

The Second batch which comprises of 13 Mamba APC was also delivered on December 5, 2019 with the total value of $21 million.

The United States has previously donated a Command and Control (C2) centre valued at $16.5 million.