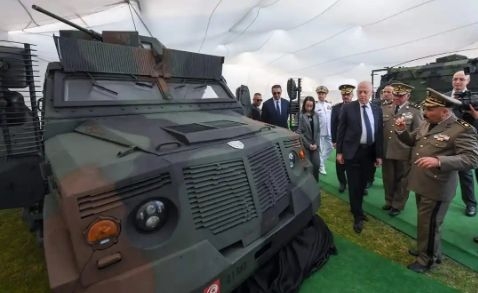 “We are not advocates of war but when the battles are imposed, we will fight with valour against our enemies, both inside and outside, and we will win on all fronts,”

The ceremony was attended by the Speaker of the House of People’s Representatives, the Prime Minister, the Ministers of National Defence, Justice and the Interior, members of the Supreme Council of the Armed Forces and military officials, as well as te Governor of Tunis and the Mayor of the city of Tunis.

Although still a prototype, the Barb MRAP layout is conventional wheeled 4×4 vehice using a V-shaped hull design, and blast mitigation seating offering high level of protection against mine and IED (Improvised Explosive Device) blast. The Barb MRAP features one open turret and it can be armed with one 12.7mm heavy machine gun.

The engine is at the front, driver and commander in the middle and troops compartment at the rear. The vehicle is expected to be able to carried a total of 11 soldiers. However most of these features are likely to change as the design matures over time.

Tunisia which faces a jihadist guerilla in the westen part of the country is trying to build up it’s military industrial complex to supply it’s Army.