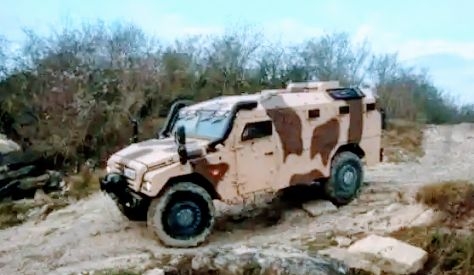 Regarding the limited number of vehicles ordered in two different variants, Military Africa understands that this is to support and accompany the artillery systems on truck Caesar ordered from Nexter. Also, other strategic units of the Royal Moroccan Army such as the Artillery and mechanized infantry already operate more than 2 000 Humvee americans, heavily armed (missiles, Tow, Milan, HJ8, Konkurs, machine guns, 12.7), designed by AM General and Vamtac manufacturer’s Spanish Urovesa in the configuration ambulances.

The Sherpa armoured vehicle is currently comprised of four basic models : the Sherpa Scout, a reconnaissance vehicle armored with capacity for four to five soldiers, the Carrier, (with a rear flat bed) which is specially equipped for the transport of troops and / or communication systems, the APC and the Sherpa Special Forces, for missions of infiltration.

The Sherpa has a gross vehicle mass of 11 tons with a 3.3 ton payload. It can be transported by C-130 and A400M aircraft. With engines up to 265 hp, it has a maximum road speed of 110 km/h and range of 1 000 km. The vehicle can be fitted with a manual turret or remotely operated weapon station armed with a machine gun up to 12.7 mm.

The Sherpa APC version can carry up to ten people including driver and commander and is available with two or four side doors. Various armour options are available for landmine and ballistic protection.

The Scout variant (former Sherpa 2), available in unarmored or armored variants, is ideally suited for tactical missions such as scouting, patrol, convoy escort, and command and liaison.

The Sherpa Light Scout can carry up to 5 military personnel including driver and commander. The vehicle can be fitted with a manual turret or remotely operated weapon station armed with a machine gun up to 12.7 mm. It can be easily transported by military aircraft as A400m or C-130. The vehicle is already in service by NATO members, France, and other countries.

So far, more than 1 000 Sherpas have been built, the vehicle has seen service with NATO (the International Security Assistance Forces have used the vehicle in Afghanistan) and countries such as Chile, Kuwait, Lebanon and Indonesia. An Assault Ladder version has been acquired by India, Brazil and France for police/security missions.