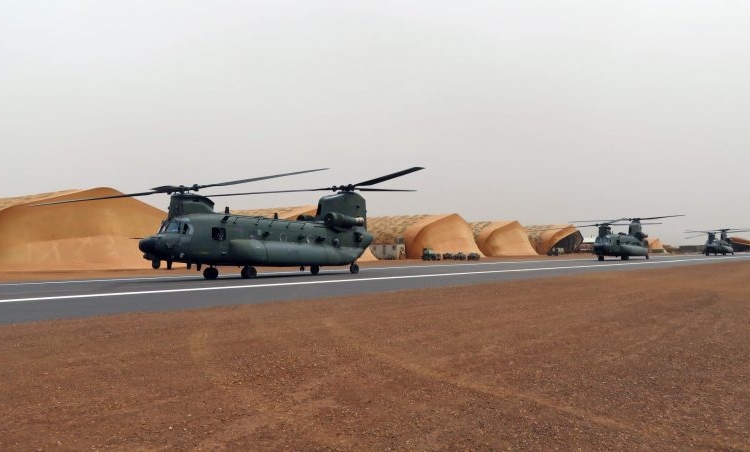 CH-47D Chinooks belonging to the Royal Air Force detachment supporting the French-led Operation Barkhane in Mali have now completed more than 2,000 operational hours, including nearly 340 hours so far this year.

The Chinook helicopters from RAF Odiham have been supporting the ongoing French military-led insurgency countering operations in Mali since  July 2018.

Since then, the RAF says that they have moved more than 1,000t of freight and over 12,000 passengers, even in temperatures up to 47 degrees centigrade which has been accompanied by frequent dust storms.

Each of the CH-47 aircraft are operated by 18(B) Squadron and are usually based at RAF Odiham in the UK.

Si Elsey, RAF detachment wing commander, said: ‘We have not lost a sortie due to COVID-19 and the French have maintained a high tempo of operations throughout. Once their troops are in the field, we re-supply them and can lift vehicles in and out as required.’

‘Unfortunately, terrorism does not recognize pandemics, so the deployed personnel have maintained their operational focus while observing COVID-19 measures’, Elsey continued

“The deployed personnel have endeavored to maintain communications with their families and generate a level of mutual support for isolated loved ones back home during this period of worldwide turmoil caused by COVID-19. Unfortunately, terrorism does not recognize pandemics, so the deployed personnel have maintained their operational focus while observing COVID-19 measures,”

On 14 June 2018, British troops numbering about 100 arrived West Africa in support of French Operation Barkhane, a spokesperson for the French armed forces Colonel Patrik Steiger, disclosed that: ‘The first troops from the British Chinook deployment, which will comprise three heavy transport helicopters and will be deployed in Gao (Northern Mali)have arrived.’