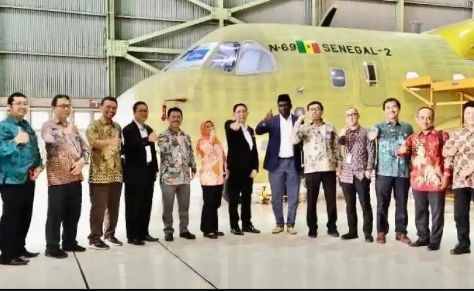 The Coronavirus Pandemic has prevented further discussion between aerospace company PT Dirgantara Indonesia (Indonesian Aerospace) and the Senegalese Air Force (Armée de l’Air du Senegal) for a second CN-235 aircraft, as travel ban between both countries are in effect.

Discussions between both countries said to be in final stage, are now expected to resume next two years said a PTDI spokesperson.

The negotiation for another CN-235 aircraft begaan during the Singapore Air Show held in February this year, with talks focussing on financing, amongst others.

“We are working to get Eximbank involved in the project in line with the Indonesian government’s goal to foster a community that is conducive for Indonesian exports,” a PTDI representative said at the time.

For the second airframe, the Senegalese Air Force (Armée de l’Air du Senegal) is considering a maritime patrol aircraft (MPA) variant of the CN-235, similar to those in service with the Indonesian Navy.

Senegal’s first CN-235 was delivered in January 2017, after ordering the aircraft from PTDI in November 2014.

Indonesian PTDI delivered the airframe in a reconfigurable form, which can undertake a variety of missions including medical evacuation, general transport duties, and VIP transport.

Senegalese Air Force is being represented by AD Trade Belgium, which has facilitated several aircraft sales from Indonesia to Senegal.

This new aircraft will bring Senegal’s order tally to five CN235s (two second hand and three new). Two second hand CN235s, also both built in Indonesia we’re acquired from an Indonesian commercial airline, delivered in November 2010 and August 2012 under a $13 million contract. One of the CN235s was later sold to Guinea.

In August 2017 it was reported that Senegal had ordered a single CN235-200 for maritime patrol through AD Trade Belgium.