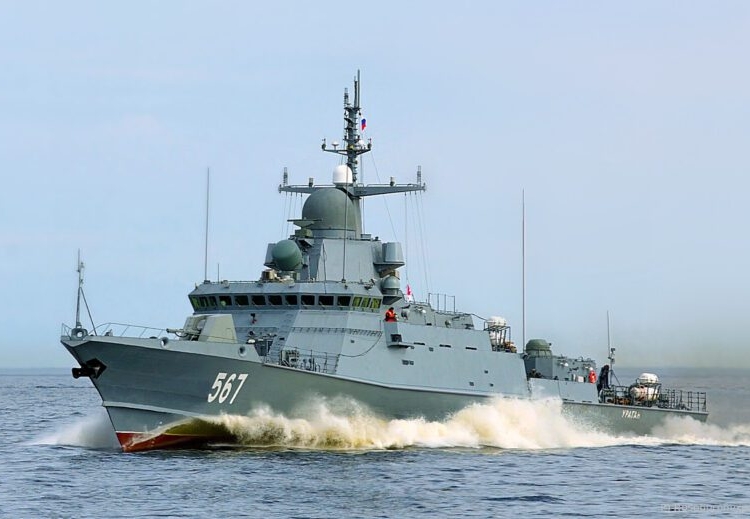 The Pantsir-M is a navalized version of the proven Pantsir-S1 self-propelled air defence system.

Once running trials of the platform is completed, the ship’s armament suite will be tested during a live-fire exercise, Odintsovo is the first Project 22800 ship to be fitted with the Pantsir-M system.

The other two surface combatants of the class, which were commissioned in 2018 and 2019, respectively, are armed with other air defense weapons.

At the 2019 International Maritime Defense Show (IMDS) held in St. Petersburg, Project 22800 sparked interest from various Africa military attaché including Nigeria. Also, the delegations of the Emirati, Saudi and Vietnamese navies and the armed forces of Namibia, Ghana, Thailand, and other countries indicated serious interest.

This is according to the Zelenodolsk Shipyard, which is, along with Pella Shipyard, one of the manufacturers of the Karakurt-class ships.

the Karakurt-class’ corvette Odintsovo has received positive remarks from the Commander-in-Chief of the Russian Navy Admiral Nikolay Evmenov, he said that; “In the short term, the surface component of the Baltic Fleet will be reinforced with a series of 6 Project 22800 small missile ships [corvettes], of which four will carry the marinized Pantsir system. The first ship will be the Odintsovo corvette that will see the tests of the Pantsir in the near future“.

Russia officially presented the export-oriented marinized Pantsir at the IDEX 2019 defense show in Abu Dhabi. The Pantsir-ME AAGM can be set up on ships with water displacement of more than 300 tons.

The system can protect surface platforms from all types of aerial threats, including low-flying anti-ship missiles and unmanned aerial vehicles, according to Rosoboronexport.

The system is capable of simultaneous firing at four attacking targets, while its surface-to-air missiles engage aerial targets flying at a distance of up to 20 kilometers and at an altitude of up to 15 kilometers. It can simultaneously engage up to 16 targets.

The navalized Pantsir-M air defence system comprises of a multi-mode adaptive radio-optical control subsystem. The operator’s work, ranging from target acquisition to firing, is fully automated. The combined use of radio and optical control systems provides the Pantsir-ME with an all-weather and round-the-clock capability, says Russian arms exporter. The system can be used against land targets as well.

The Odintsovo corvette was laid down at the Pella Shipyard in St.Petersburg in July 2016 and launched in May 2018, it was developed Almaz Central Marine Design Bureau.

Along with the Pantsir-M air defence gun-missile system, the ship is also equipped with the Kalibr cruise missiles, electronic warfare and countermeasures systems, counter-sabotage weapons, and portable anti-aircraft missile systems.

According to the official information of Almaz, the Project 22800E corvette is a new-generation small missile ship that incorporates the latest achievements in the field of precision weapons and defense subsystems. The ship is designed to destroy critical shore-based targets and surface ships and boats and to repel airstrikes.

Despite its lower class, the firepower of a Karakurt corvette can be compared to a frigate. According to Rosoboronesport’s technical data, it comes with eight Club – N or Yakhont integrated missile system, with a range of 300 km. The navalized Pantsir-ME AA missile has a range of 20 km, while the gun 5 km. It carries 32 missiles and 1000 rounds of 7.62 mm ammunition.