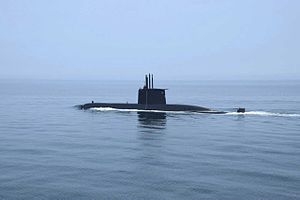 The Egyptian Navy’s third Type 209/1400mod submarine “S43” has arrived in Egypt on 5 May after leaving ThyssenKrupp Marine Systems’ (TKMS’s) yard in Germany.

S43 was officially handed over to the Egyptian Navy on 9 April in Kiel, the submarine transited the Kiel Canal on 14 April.

S43 arrived at the Alexandira Naval Base on Tuesday after traveling a distance of 7 800 kilometres, it was received by a military delegation. According to the Egyptian armed forces, the new submarine held exercises with several “friendly countries” on the way to Egypt.

The contract for the delivery of the first two Type 209/1400mod class submarines to Egypt was signed in 2011. In 2015, Egypt decided to take the option for two additional units of the most recent version of the Type 209 family.

The Egyptian military has said the new Type 209 submarine will be used to protect Egypt’s national security, protect its economic interests and ensure safe and free navigation of the Suez Canal and other regions. The vessels have a range of 11 000 nautical miles, a top speed of 21 knots and displacement of over 1 400 tonnes.

Egypt said the Type 209/1400s will be able to launch missiles and torpedoes – it is believed they will be fitted with Harpoon anti-ship missiles.

The submarines features recent technology, extraordinary battery payload and low signatures. The class can be armed with a variety of torpedo.

With the new Type 209 in place, Egypt will have one for maintenance, one for training, one ready to dive and one at sea, an indication of a significant upgrade of the Egyptian Navy’s operational capabilities.