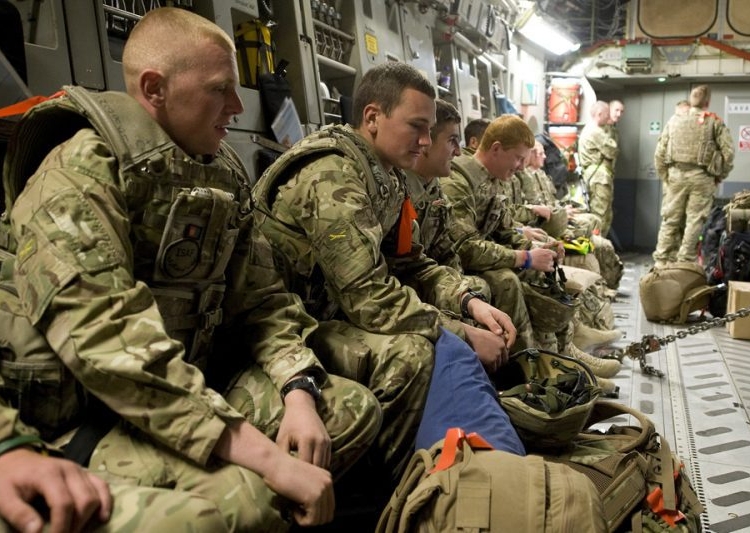 Pictured: Kingsmen from Burma Company 1 LANCS on board an RAF C-17 Globemaster Aircraft beginning their journey back to the UK. The first British troops to leave Afghanistan return home today as security in their area of Helmand Province is handed over to Afghan forces. The soldiers, all from Burma Company of 1st Battalion The Duke of Lancasterís Regiment (abbreviated ë1 LANCSí), are returning to their barracks in Catterick, North Yorkshire as their patrol base has been closed and the Afghan Uniformed Police (AUP) take responsibility for security in the region. 1 LANCS are part of Task Force Helmand, currently led by the British Armyís 4th Mechanized Brigade, known as ëThe Black Ratsí, and Burma Company are the first of the 500 British troops to be sent home from Afghanistan as announced by the Defence Secretary Phillip Hammond earlier this year.

Since the United Kingdom pledged to contribute a 250-man long-range reconnaissance task group to the United Nations Multidimensional Integrated Stabilization Mission in Mali (MINUSMA) later this year, the move has suffered delay due to logistical constraints.

Military Africa gathered that despite the delay, the British government is still committed to deploying to Mali but at a later date, most likely towards the end of the year. UK military sources disclosed that the delays were caused by challenges in building troops camp sites, arranging commands, as well as moving equipment to Mali.

In July last year, the UK British Secretary of Defence Penny Mordaunt announced through a statement released that the United Kingdom will deploy 250 reconnaissance troops to Mali this summer.

The deployment will provide better situational awareness as well as information provision that will be beneficial to both the military and civilian personnel in support of providing sustainable peace in war-torn Mali, Defence Secretary Penny said.

Even before reaching the deployment deadline, British Supacat “Jackal” vehicles were heavily upgraded ahead of deploying to the Malian theater. The Jackal’s components received various upgrade packages including; the sensor, communications, and environmental systems.

The upgrade packages were trialed during Exercise ‘Wessex Storm’ on Salisbury Plain training area during February till early March, according to a senior British Army officer.

During the six-weeks Exercise ‘Wessex Storm’, more than 2,500 regular and reserve soldiers from 7th Infantry Brigade (the Desert Rats) were deployed on Salisbury Plain.

Since June 2018, British troops numbering about 100 arrived West Africa in support of French Operation Barkhane – a counter-terrorism operation in the Sahel region.

A spokesperson for the French armed forces Colonel Patrik Steiger, disclosed that: ‘The first troops from the British Chinook deployment, which will comprise three heavy transport helicopters and will be deployed in Gao (Northern Mali)have arrived.’

Meanwhile, Canada has since pulled back its forces from Mali as scheduled in July 2019, after completing its twelve month deployment.