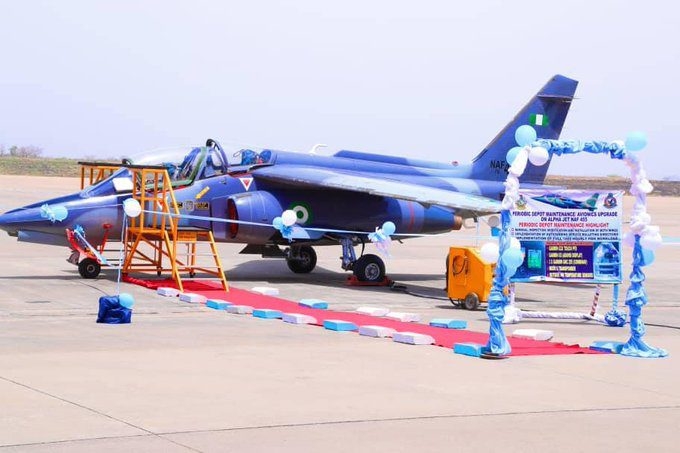 The Nigerian Air Force has reactivated another Dassault Alpha jet light attack and trainer aircraft after completing a Periodic Depot Maintenance (PDM) on the aircraft. These, the Nigerian Air Force Chief said is to further its sustained efforts to boost Air Power employment capability against insurgency and other security challenges.

According to him, the in-house PDM, apart from being cost-effective when compared to the overseas option, also affords NAF technicians the opportunity to build better technical capacity.

“It is worth mentioning that our NAF technicians were the major manpower for this PDM.

Speaking during the ceremony, the Chief of the Air Staff, Air Marshal Sadique Abubakar, expressed satisfaction with the conduct of the PDM. The CAS noted that the challenge posed by lack of avionics spares, which accounted for over 60 per cent of the Alpha Jet critical spares, had also been addressed with the upgrade.

He said the upgraded instruments and accessories were readily available in the market, thus ensuring availability of maintenance support spares, which would translate to improved aircraft availability.

He also said that an Mi-35P was also undergoing in-country reactivation in Port Harcourt, which would further boost aircraft availability for enhanced mission accomplishment.

The CAS further disclosed that the base is also being positioned to efficiently support the A-29 Super Tucano aircraft when it arrives.

The Nigerian Air Force has reinstated its commitments to source most of the spare part needed in aircraft maintenance locally through its Research and Development Center.

The Chief of Air Staff, Air Marshal Sadique Abubakar, who made the disclosure at the closing of a 2-day Air Engineering Conference in Kaduna over the weekend, themed, ‘Building Capacity for Self-Reliance in Aircraft/Armament Engineering for Enhanced Air Power Delivery in the NAF’.

He said, if the resolutions of the conference are implemented, most of the spare parts needed by the NAF will be produced by the Center.

“We have achieved between 75 percent to 82 percent serviceability of aircrafts in our inventory and hopefully, with this conference and the implementation of the resolutions, we should be looking at 85 to 95 per cent serviceability, which will boil down to improvement of the NAF operational capability and enhance fight against insurgency.

“There is no gainsaying that the success of any Air Force depends largely on the air engineering specialty, tasked with ensuring aircraft readiness for deployment at any time. Air Engineering is the bedrock of aviation and it involves the performance of tasks required to ensure the continuing airworthiness of aircraft and armament systems,” he further affirmed.

He explained that in addressing the current security challenges, the NAF must put together a carefully planned strategy not only covering maintenance of platforms but also to be self-reliant in the maintenance of all its air assets.