Why the Kalashinikov AK-47 Rifle is so popular in Africa. 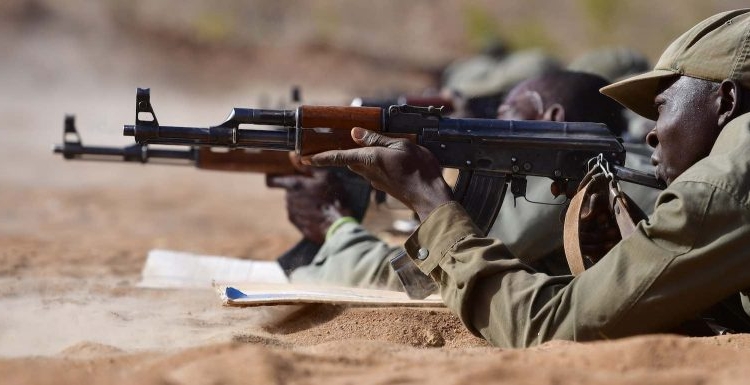 KOULIKORO, MALI - MARCH 09: Soldiers of the Malian Armed Forces (MAF) shoot with an AK47 rifle and live ammunition at the shooting range at a training base on March 09 2017 in Koulikoro, Mali. The training is part of a program of the European Union Training Mission Mali (EUTM), in which European Union military personnel train officers of the Malian Armed Forces within six weeks. These officers again use their learned expertise to train their cadets in six weeks that include general tactics, shooting with light weapons, first aid and movement in unknown terrain. The conflict in Mali between government forces and rebels has shifted from the northern to the central part of the country and rebels are finding refuge in neighboring Burkina Faso. and Mauritania. (Photo by Alexander Koerner/Getty Images)

The Kalashnikov AK-47 has been in all conflict in Africa since the 1950s. The reputation of the AK-47 was depicted in the Nicholas Cage movie ‘Lord of War’. Mozambique even went further and immortalized it on their flag.

A rifle of choice for rebels, terrorists, drug lords and gangsters alike. This singular firearm has seen the rise and fall of African empires, dictators and nations from the North down to the South. Virtually everyone in Africa has heard about it and it symbolizes either a tool for self-defense, oppression or liberation depending on the welder. The AK-47 has seen battles from the urban cities to the dense Central African jungles, the harsh North African desert down to the Southern Savannah. The former Egyptian president Anwar Sadat was assassinated by an AK-47 welding Islamic jihadists, Ugandan president Idi Amin secured his life presidency by arming his troops with the AK-47.

Kalashnikov wielding poachers defend their booty against border patrols,– themselves armed with the AK-47. Nations have fought each with the Kalashnikov used on both sides. Most African militaries are underfunded and so the AK-47 is a good choice. What makes this particular assault rifle so successful in the African continent?

Militar Africa unravels the mystery behind the popularity of the AK-47s rifle in Africa.

The AK-47’s is very simple to operate and it can handle a rough treatment. The conditions during combat or training is difficult so the AK can handle it. Also, it was made to be reliable and easy to repair. The rifle was designed to be easy to use, easy to repair, and reliable. Some soldiers are not disciplined and so they don’t maintain their rifle but the AK is very rugged which is good for dirty environment. The way it works is simple so it doesn’t jam easily. Some AK-47s can have a service life of more than 40 years if kept in a good condition.

Since I have been given the AK-47 rifle I have not had trouble using the gun. Me and my unit has been using ours for the past six years and counting and yet it is still reliable and working perfectly fine.

A brief history of the Avtomat Kalashnikov AK-47 Assault rifle

The AK-47 assault rifle was designed by a Soviet tank Commander Mikhail Kalashnikov in 1946, the first practical prototype began state trials in 1947 and in 1948 full production started. There are about 75 million AK-47 rifles and 200 million various Kalashnikov AK-variant in the world today one for every 35 people. According to Michael Hodges the author of AK47: The Story of the People’s Gun.

There are more Kalashnikov rifles or its variants in the world than all other assault rifles combined. More than 50 countries produce the rifle either legally or otherwise with China (Type-56) at the top.

The international average price of a Kalashnikov rifle or its alternative is about $500 although, in Africa, the price is relatively cheaper especially in conflict zones since the supply is abundant.

In 2005, the editor of the book ‘illicit’ Moises Naim revealed that a village in Kenya, an AK-47 cost 15 cows in 1986. Nineteen years later the price had crashed to just four cows. It is said that in Rwanda, during the civil war a buyer could purchase a good Kalashnikov at the price of a healthy chicken.

Despite being in circulation in Africa for years, the Kalashnikov and its variants remain the most widely used rifle compared to their Western counterparts due to its reliability under harsh conditions, simplicity and low production costs amongst others. It can be found in virtually every geographic region in the continent.

It is mostly favored by irregular forces, insurgents and low-budget militaries. Other types of individual, crew-served and even specialized firearms was developed from the AK-47. The Kalashnikov family makes up of about 75% of all firearms in Africa. Additionally, it’s availability in Africa can be attributed to the fact that many African countries manufacture it in large quantities

Regardless of its popularity, the AK-47 assault rifle is not, in fact, a superior design as compared to its worldwide counterparts such as the M16 and M14 series, CETME and G3, FN FAL to mention a few. It is less accurate, not easily modified and quite bulky than others. It also has a lesser range, it cannot be easily adapted to mount various accessories, it’s quite heavy than most assault rifles, it has the heaviest metal magazines and an inferior firepower-weight ratio.

It notoriously inaccurate when fired from the shoulder in full-automatic mode even though it was designed to be fired in that way. To add on top of that, AK-47’s center of mass is off-center causing the rifle to shift sideways when firing. Not to mention it’s bone-jarring recoil force which causes the rifle to jerk upwards after every shot.

In spite of all this Inherent deficiencies, African militaries still scurry to field the rifle. Here are some of the reasons the Avtomat Kalashnikov AK-47 Assault rifle is so popular in Africa.

No 1) Firepower
No 2) Reliability
No 3) Affordability
No 4) Simplicity
No 5) Ease of manufacturing and low-production costs.

When fired, the AK-47 can penetrate a wide range of objects such as vehicles, walls and personal armor. Its excellent gas-operated system and impressive rate of fire can shoot a stream of lethal 7.62 x 39mm bullets, the 7.62 x 39mm is a lethal caliber which is devastating to the human body. The bullet exit generates a large hole. The AK’s rounds are more powerful and more likely to kill you than the 5.56 NATO used by the M16 rifle due to their higher kinetic energy, higher caliber, and it depends less on velocity-affected yawing and tumbling effects. Although, the rounds also weigh more than the 5.56

Reliability
The Avtomata Kalashnikova AK-47 assault rifle can be operated in a difficult environment like in muddy, dusty or wet jungles without fear of equipment failures. It rarely jams (This is not to say that AKs never jam; just they don’t this as much as most other comparable weapons would in the circumstances.) This is mostly attributed to its simple design and operating mechanism. During the Vietnam war, Vietcongs would emerge from their tunnel hideout covered from head to toe in mud and dirty and yet they scurry out Kalashnikov blazing while US marine soldiers who have been exposed to the dust generated by a nearby helicopter landing usually suffer a malfunction.

Affordable
As mentioned at the beginning of this article, Kalashnikov rifle and it variant are sold at very cheap price in Africa sometimes being exchanged for livestock or food. As a result of the ongoing crisis in Libya and most African countries in general, stockpiles of small arms have been looted by rebel forces or terrorists and sold at the black market. Such overabundance of the rifle has crashed the average price in Africa.

During the ousting of Mohammad Ghadafi by rebel forces, thousands of Kalashnikovs was retrieved from various military base and outposts in Libya with most finding its way all over the continent.

Simplicity
It is said that a complete novice could reload and fire an AK-47 under an hour and can start hitting human-sized targets 300 meters away six hours after been introduced to the firearm. Even children used illegally as child soldiers have been able to utilize the Kalashnikov effectively. Due to its design simplicity, the AK47 can be disassembled into 7 large parts making assembly and disassembling extremely easy. It’s uses long-stroke gas piston and a rotating bolt.

Ease-of-manufactured and Low production cost
The use of easy to get materials like iron sheets, steel and wood makes the AK-47 cheap to produce requiring little or no sophisticated machinery or technical knowledge. Many AK-47s has been built solely with hand tools.

The AK can be made out of stamped metal, unlike other rifles which needs precision machining for its parts (you can literally make an AK lower receiver out of a  metal tray with a hammer) The rifle itself has no parts that cannot be filed, ground or machined from steel, or hammered from sheet metal, or riveted or welded from parts made this way. Most vehicle repair shops have the tools needed to build an AK. A local Blacksmith can produce replacement parts for the AK-47 if not the whole rifle apart from rifling the barrel.

OVERVIEW
The successes of the AK-47 assault rifle has sprung new designs. As combat experience revealed that having a singular caliber or rifle parts would simplify supply and logistics, therefore, more and more African countries are acquiring Kalashnikov based firearms.

To the untrained eye, many “AK-47s” are actually AKMs , AK-74, RPK or Dragunov SVD sniper rifle since they are all aesthetically similar.

African countries that use the Kalashnikov AK-47 Assault rifle

Here are some of the African countries using the Kalashnikov rifle and its variants. Although, some countries listed here do not use them as their primary firearm but utilize the AK for other roles like training, special operations, and warfare, elite protection units or for paramilitary forces…