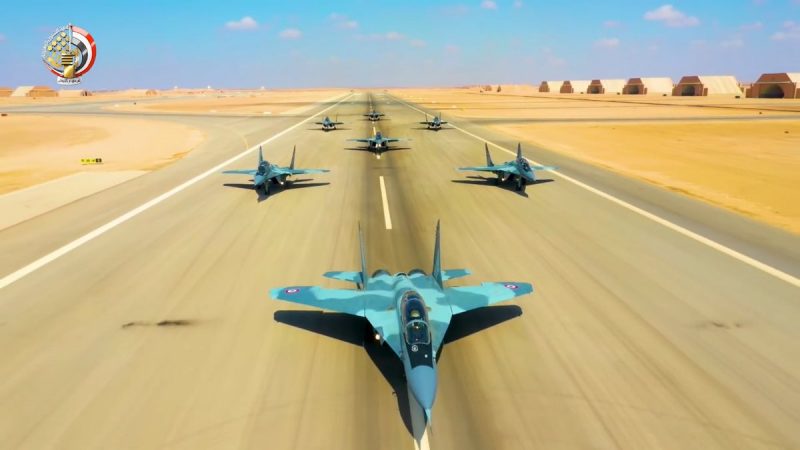 The Egyptian Air Force (EAF) on 15 January released a footage of more than a dozen Egyptian MiG-29 Fulcrums taking off at the same time, as part of a readiness exercise.

The exercise named Qadir-2020 involved a “show of force” with sixteen MiG-29M/M2 fighter jets in a so-called “Elephant Walk.”

According to a statement by the Egyptian Ministry of Defense, the ground, navy and air forces, along with special forces of thunderbolt and parachuting units, participated in the Qadir-2020 Exercise.

Qadir-2020 Exercise will train the Egyptian the forces to launch simultaneous military operations on all fronts, especially at strategic areas and along the coasts of the Red Sea.

“The maneuver (Qadir 2020) emphasizes the strength and readiness of the Armed Forces to protect the capabilities and wealth of the country, as the armed forces’ fighting capabilities have witnessed a remarkable development over the past five years,” the statement read.

Regarding the “Elephant Walk,” David Cenciotti, lead author of The Aviationist explains that “Elephant walk” exercises are conducted quite regularly at airbases all around the world to test the squadrons ability to launch large formations of aircraft at short notice.

Earlier this month, the Egyptian naval forces conducted a large-scale amphibious exercise in the Mediterranean Sea, amid escalating tensions in the region after Turkey’s parliament agreed to send military troops to Libya.

In 2015, Egypt signed a contract with Russia’s Rosoboronexport for 46 MiG-29M/M2 fighters.