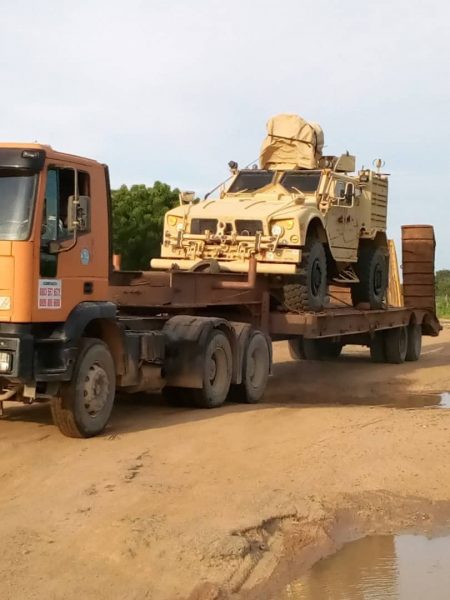 The six Oshkosh MRAP All-Terrain Vehicle (M-ATV) intercepted by the Nigerian Army in the troubled Adamawa State has been handed over to the United States authorities.

Following directive from the National Security Adviser, the six Oshkosh M-ATV were handed over to the Deputy Chief of Mission, United States Embassy in Nigeria, Kathleen FitzGibbon on Friday, 11 October.

The Oshkosh vehicle were intercepted by joint security operatives on Nigeria/Cameroon border in Adamawa on August 24, 2019 following intensive intelligence operations.

While receiving the equipment, FitzGibbon thanked the Nigerian Government for its understanding, adding that the military vehicles were heading to Niger Republic for security mission.

She said, “Nigeria and the United States have good relations and understanding, and the vehicles were heading to Niger Republic for security mission.”

The M-ATV is a US-made Mine Resistant Ambush Protected (MRAP) vehicle. It was designed by Oshkosh Defense for the United States Army, it can carry five soldiers in different terrains.