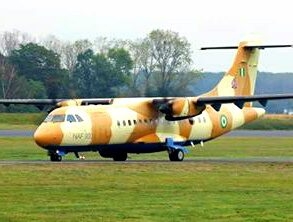 A Nigerian Air Force ATR 42-500MP ISR/transport aircraft has arrived in Germany for an MRO operation.

Photographs released on social media by Scramble Magazine suggests that the aircraft will undergo a maintenance operation to be conducted by Rheinland Air Service (RAS) at Mönchengladbach.

The NAF 930 arrived Germany through Alger/Houari Boumediene in Algeria.

Both aircraft were assigned to the 81 Air Maritime Group based at Benin, Edo state but are usually deployed with the 75 Strike Group (75 STG) in Yola as part of the Lafiya Dole Air Task Force (ATF).

According to a top level official of the Nigerian Air Force who spoke with Military Africa, the NAF 930 would undergo a major Maintenance, Repair and Overhaul (MRO) operation at the Rheinland Air Service (RAS) facility at mönchengladbach, Germany.

RAS is one of three companies worldwide certified for the repair and overhaul of control elements, such as landing flaps.

Alenia Aeronautica delivered the first of two ATR 42-500MP (Maritime Patrol) aircraft, as part of the contract signed in March 2007.

The Nigerian ATR 42MPs is similar to that in service with the Italian Guardia di Finanza.

It is currently equipped with a Galileo Avionica airborne tactical observation and surveillance system that includes search radar and an EOST-45 electro-optic surveillance and tracking sensor.

However, unlike the Italian aircraft, the Nigerian ATRs have a hatch that can be opened in flight on the cabin floor for SAR and air-drop use.