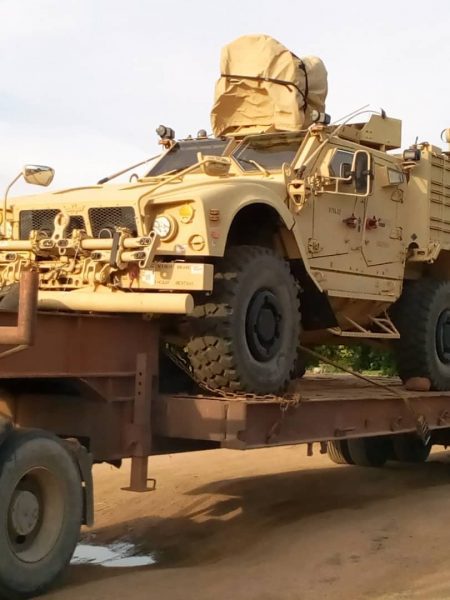 The six Oshkosh MRAP All-Terrain Vehicle (M-ATV) appears to have been imported and transported into Nigeria’s northeast region without proper due process or documentation.

Sources close to the Nigerian Army disclosed that the vehicles were seized in Fufore Local Government Area by the 23 Armoured Brigade based in Yola.

Following the seizure, the Nigerian Army headquarter immediately began an investigation into the origin and destination of the unique vehicles. The Army promptly handed over the six Oshkosh MRAP All-Terrain Vehicle (M-ATV) to the Nigeria Customs Service (NCS) in the interim.

The six Oshkosh MRAP All-Terrain Vehicle (M-ATV) was handed over to the comptroller of Customs in charge of Adamawa and Taraba, Olumoh Kamaldeen, at a ceremony in Konkol, Fufore LGA

It incorporates a battle-proven armor configuration which provides survivable crew protection even in the most grueling terrain.

Its armament includes remote-controlled weapon station armed with weapons up to 12,7 mm in caliber.