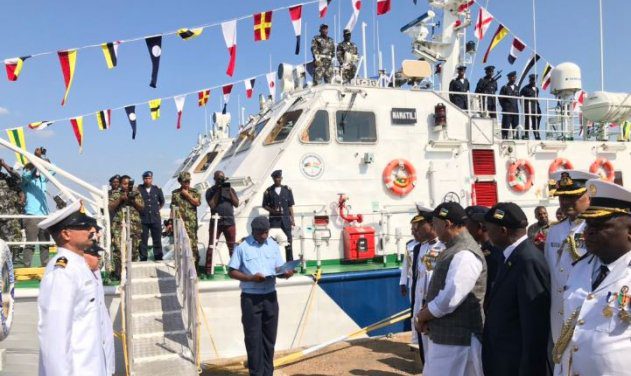 Two Indian-made fast patrol and interceptor boats for coastal surveillance have been handed over to the Mozambican Navy on Monday, July 29, with the objective of boosting bilateral military ties.

The boats were handed over during a three-day visit to Mozambique by Indian Defence Minister Rajnath Singh. A ceremony was held at the Mozambican Naval Headquarters with the handing-over certificate being signed by the Director-General, Coast Guards of India, K Natarajan, and Chief of Mozambican Navy.

“India is willing to forge a strong bilateral relationship with Mozambique by increasing regular engagement and cooperation in multiple spheres,” Singh tweeted after his arrival in the country.

Photograph published on social media reveals that the two boats are the high-speed L&T-class fast interceptor craft built by L&T Shipyard for the Indian Coast Guard.

As part of the delivery, a four-member Indian Coast Guard team will be stationed to assist with training, support for maintenance and operation of the two boats.

The official release from Defence Ministry said that the visit will ‘witness the growing defence co-operation between Mozambique and India’ and the ‘potential such collaboration offers for enhancing security in the Indian Ocean Region.’

This donation comes at a time when India is looking to increase its presence in Africa which has witnessed a massive growth in Chinese influence. The Mozambican Navy currently operates three PCI-class inshore patrol boat however, its operational status is unknown.