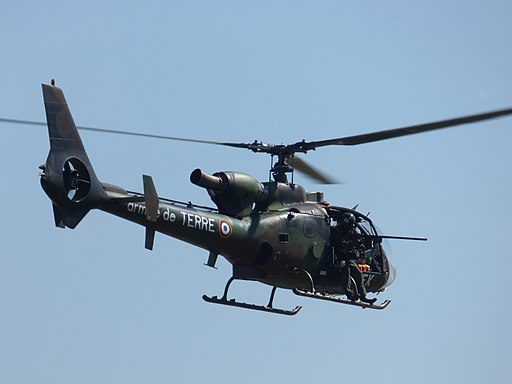 More details regarding the Aerospatiale SA341 Gazelle observation and light attack helicopter belonging to the French military which crashed in Mali on June 14.

The SA341 Gazelle helicopter deployed in Mali with the French Army’s Light Aviation (Aviation Légère de L’Armée de Terre: ALAT) supporting Operation Barkhane was shot down by jihadists, close to the border between Mali and Niger was shot down by enemy fire.

All three personnel onboard were immediately rescued.

According to details from a Request For Information (RFI), it explains that Operations Barkhane soldiers who were fighting in the centre of a jihadist hideout on the border between Mali and Niger, the Gazelle helicopter was hit by 7.62 mm caliber fire from a Kalashnikov-PKM machine gun, causing a fire and then a loss of engine power, forcing the crew to make a forced landing near the combat zone on dusty ground and with bad visibility.

The pilot and aircraft commander at the front of the aircraft were injured by the hard landing, while in the back, a commando sniper was lightly injured, and managed to pull his comrades out of the helicopter, before a Tiger attack helicopter cames to assist them, at the risk of being shot.

Following the controlled crash landing, the two pilots were extracted by being strapped to the landing gear of an Airbus Tiger attack helicopter. The third person, a special forces soldier, destroyed the damaged Gazelle before being exfiltrated in another helicopter.

The Aérospatiale Gazelle is a French five-seat helicopter, commonly used for light transport, scouting and light attack duties. The French Army has deployed the Gazelle overseas in many large-scale operations, often in support of international military intervention efforts.

Following the overthrow of former Libyan ruler Mohammad Ghadafi by NATO forces and local fighters in 2011, various arms and weapons looted from the military’s stockpiles has found their way through the porous Sahara desert down south fueling internal crises and regional conflicts. Thus, the French military has been engaged in counter-terror operations since then.