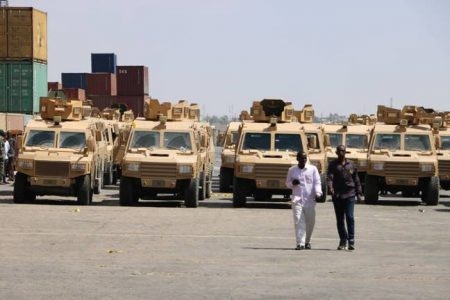 The donated Storm personnel carriers made by Qatari company Stark Motors are part of a wide effort by Qatar to rebuild and the Somalian army especially as the country is currently battling Islamist insurgents.

According to the Qatari Ministry of Defense, “The aid will help Somalia’s effort to establish peace and stability, and fight terrorism”

The vehicles have been given in the form of a Qatari grant to support the people and government of Somalia, to contribute to the strengthening of institutions in Somalia and its internationally central government.

The grant also comes as a support to establish security and combat terrorism and extremism in Somalia. page 16

Currently, the Somali army has a limited armored capability, raising fears of their capacity in taking over the country’s overall security after the planned withdrawal of African Union (AMISOM) forces. Likewise, on December 2018, Mali received 24 Storm 4×4 Armored Personnel Carrier from Qatar