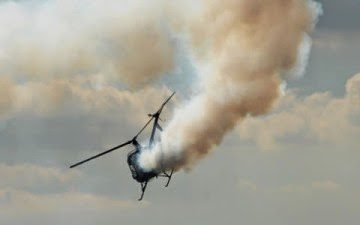 The Nigerian Air force through its official Twitter handle announced on
2nd January 2019 that its Russian-Made Mil Mi-35M attack helicopters has crashed.

A Nigerian Air Force (NAF) Helicopter was lost in combat while providing close air support to troops of 145 Battalion at Damasak in Northern Borno State.

Ibikunle Daramola, Air Commodore Director of Public Relations and Information Nigerian Air Force made known that details of the crash will be made available to the public.

“The mission was part of the ongoing counterinsurgency operations in the North East. The incident, occurred about 7:45 pm today, 2 January 2019. Details of the cause of the crash are still scanty”.

In December 2016, the NAF lost an Agusta AW 101 medium-lift helicopter, which crashed at the Nigerian Air Force base in Makurdi. Shortly after, another Nigerian Air Force Agusta 109 helicopter was brought down in a body of water by the crew after it developed a ‘technical glitch’.

In 2018, two Nigerian Air Force F-7Ni fighter jets collided during an Independence Day air show rehearsal, resulting in the loss of both aircraft and the death of a fighter pilot.

Over the years, the Nigerian Air Force is revitalizing its fleet through multiple acquisitions in order to bolster it’s counter terrorism operations. On 30 April 2018, the Nigerian Air Force received two new Mi-35M helicopter, which are part of a haul of twelve brand new units ordered from Russian Helicopters in September 2015.

The NAF also inducted two Bell 412 combat utility helicopters which was donated by the Rivers state government to the NAF on 5 November 2017 and is expecting the delivery of the PAC JF-17 Thunder fighter jet from Pakistan.