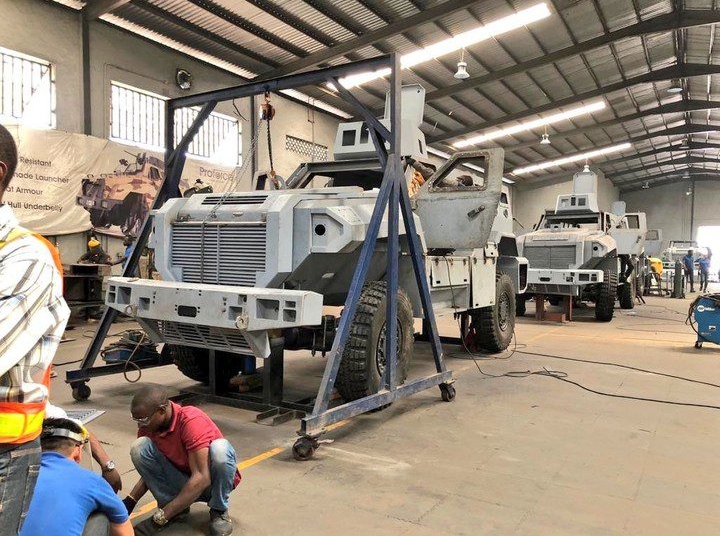 Following the successful debut of the Ara (Thunder) Mine Resistant Ambush Protected (MRAP), Proforce Limited is set to launch the PF Ara 2 MRAP in 2019.

The Ara 2 MRAP which means “Thunder” in the local dialect is a 4×4 Armored Personnel Carrier, with thirty presently being produced for the Nigerian Army. Raymond Asare-Sintim, the Business Development Executive at Proforce disclosed that foreign countries have requested for another twenty. Although, the foreign countries were not revealed.

The PF Ara 2 is a monocoque vehicle built to STANAG level 4569 protection standards with double skin protection of Level 3A and 3B, and an underbelly of 4A and 4B. This protection level ensures an underbelly with a V-shaped hull design that can withstand a 10 kg mine.

The higher ground clearance of 442 mm and the central tyre inflation system enhances the vehicle’s off-road capabilities and can take this vehicle to urban, mountainous and challenging rural terrains, Proforce said.

With the capacity to carry up to 12 personnel plus equipment, the PF Ara 2 can be configured into multiple MRAP variants for a wide range of missions including recovery, command and control, ambulance, field kitchen and reconnaissance.

The Ara 2 has a length of 7.1 metres and height of 3.3 m, and gross weight of 15 tons. A 12.7 mm machinegun can be mounted on a 360 degree roof turret which can be open or fully enclosed. Optional equipment includes slat armour, gun ports and grenade launchers as well as reactive armour, according to Proforce.

Proforce builds armoured personnel carriers (APCs), MRAPs, patrol boats, hard armour plates, and ballistic helmet and vests. The company is diversifying into new areas of the defence industry. These include manufacturing of communication devices in collaboration with technical partners from Pakistan and manufacturing of unmanned aerial vehicles (UAVs) in collaboration with a company from South Korea.