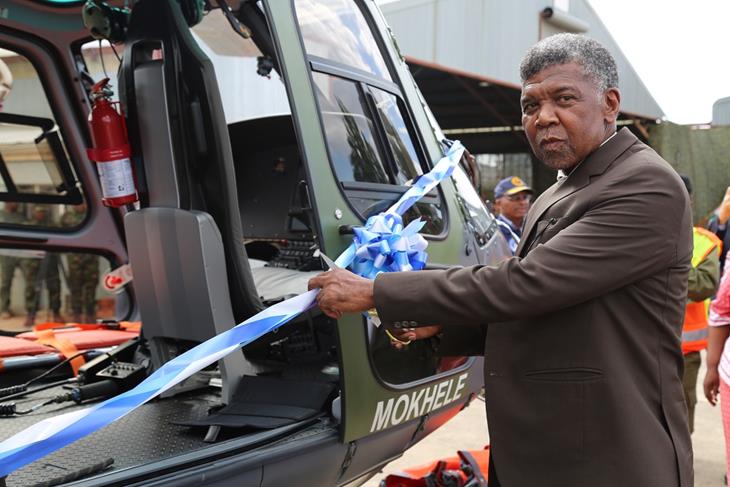 The helicopter joins two H125s that entered service in 2017 and 2018, according to Deputy Prime Minister Monyane Moleleki, replaces an EC135 that crashed in April 2017.

The H125 is to be used for law enforcement, transporting government officials, and search and rescue, Moleleki added.

Speaking at the ceremony on behalf of the Airbus Helicopters Southern Africa, which manufactured that H125 helicopter Mrs Linnet, said Airbus Helicopters Southern Africa and LDF had been maintaining good relations which have been improving over the years, and that the commissioning ceremony of that H125 helicopter into LDF is one of the mile stone successes they achieved together.

She expressed that her company has commissioned three helicopters to LDF, which include the LDF23, which she defined it as the most equipped helicopter in Southern African countries.

At the same event the Lesotho Defence Force commander Lieutenant General Mojalefa Letsoela, pointed out that Mokhele is the second to none in their inventory to be used for both military and humanitarian applications across a wide spectrum of aerial operations.

He said purchasing an aircraft like any major asset is a complex undertaking.

He further said the choice of the ideal helicopter type was premised on LDF key mission requirements, and as a result of that a considerable amount of time has been spent on evaluation of different options dictated by limited funds and lead time of delivery.

In his speech he also indicated that in this regard the H125 was chosen as the most suitable type of its category, saying its robust performance envelope makes it ideal for their unique operating environment predominantly characterized by the rugged terrain and unappealing weather conditions.

He said Mokhele will be used extensively on a wide range of aerial supportive tasks including law enforcement, search and rescue and emergency evaluation operations.

In his remarks the Deputy Prime Minister Honorable Monyane Moleleki, said the commissioning of this new helicopter is evident of the expansion of the aerial operational capability of the Lesotho Defence Force in realization of its true motto; Hope of the Nation.

He also indicated that the rapidly changing strategic security environment in Lesotho requires them to employ different military operational capabilities to defend Lesotho, and to protect its citizens.

In his speech he further said the acquisition of this new helicopter which is of high calibre and performance, will add value to the inventory of LDF assets.

He explained that its acquisition comes as a replacement to the one that was involved in a catastrophic crash at Thaba-Putsoa in April 2017, claiming lives of many soldiers in uniform, whose meritorious service to Lesotho will forever be remembered.