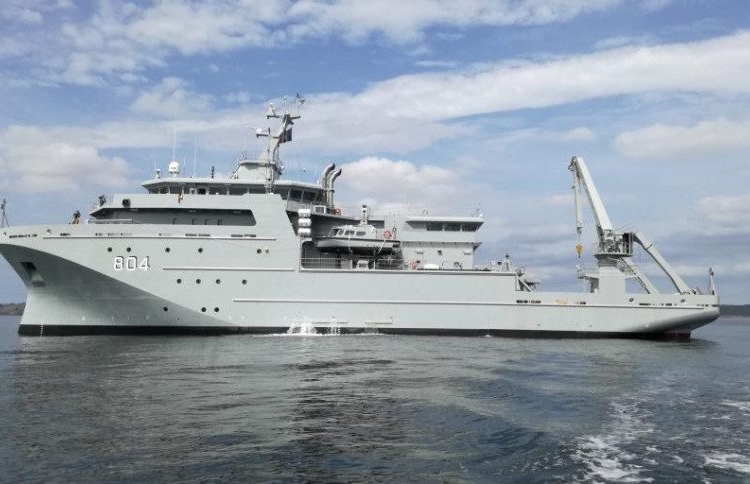 The 72-meter hydro-oceanographic and multi-missions vessel (BHO2M) was delivered on 26 October in France, the Dar al Beida, was ordered in June 2016 through Kership, a joint venture between Piriou and the Naval Group (formerly DCNS). Piriou was responsible for the design and construction of the vessel at its facilities at Concarneau. The SHOM (French Navy Hydrographic and Oceanographic Department) was responsible for the scientific research component of the vessel and the training of Moroccan hydrography, oceanography and cartography personnel.

Dar al Beida will enable the Royal Moroccan Navy the ability to carry out to carry out in-depth surveys of its waters such as hydrographic surveying for civil and military purposes, understanding the seabed, salinity and temperature of the ocean will help submariners, for example. The Royal Mooccan Navy formerly relied on France to map the seabed in Morocco’s deeper offshore waters since Morocco is a member of the International Hydrographic Organisation (IHO).

The BHO2M is a last generation scientific vessel equipped with systems matching the topographic studies answering the International Hydrographic Organization (IHO) standards. She was designed from the Multi-Missions vessel (B2M) presently under construction in Concarneau for the French Navy.

During the delivery last month, Vincent Faujour, Piriou General Manager, said “We are very pleased and honoured to deliver this second vessel to the Moroccan Royal Navy. Thanks in particular to a close and crucial collaboration with the SHOM, we have designed a vessel with all the qualities required to become the new reference in terms of hydro-oceanographic survey. Following on from the expedition vessel Yersin delivered in 2015 and the Polar Logistic Vessel L’Astrolabe delivered in 2017, Piriou thus confirms its ability to design and build very technical vessels.”

The Dar al Beida is 72 metres long, 15 metres wide and displaces 2 600 tons. It has a draft of only 5.5 metres, allowing it to work in relatively shallow water. Various items of hydrographic equipment include multiple sonar systems and profilers and a device for measuring the conductivity and temperature of water and allowing water samples to be taken. Sediment sampling can be done out to depths of 6 000 metres. In addition, the vessel has a meteorological station, two 8 metre survey boats (equipped with sonar and other systems) and a rigid-hulled inflatable boat. It has provision for unmanned surface vessels but is not fitted with them.

There is accommodation for 30 crew and 20 scientific personnel, who can sail for up to a month. Diesel-electric propulsion with four 1 200 kW generators, giving a top speed of 14 knots, allows for silent operation to improve the quality of acoustic data collected.

Although the vessel’s primary mission is hydrographic survey, it can also carry out surveillance, humanitarian assistance, rescue, environmental protection and military missions.

Piriou pointed out that the contract is the third with the Royal Moroccan Navy after contracts for the construction of a 50 m Landing Craft Tank (LCT) and the refit of the offshore Patrol Vessel (OPV) 64 Rais Bargach.

The BHO2M is able to fulfil long lasting operations, mainly hydrographic and oceanographic missions such as the completion of topographic studies, data acquisition and process, scientific sampling and the related analyses. She is fitted with an appendix where the acoustic bases of the scientific equipment -including the two multibeam echo sounders- are located.

As the most performing vessel of her generation regarding acoustics, the BHO2M will be able to achieve these missions at high speed while in a rough sea.