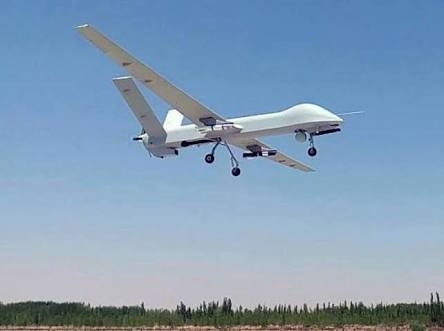 The Algerian Ministry of National Defence (MDN) recently displayed two Chinese-made unmanned aerial vehicles (UAVs) in its coverage of a visit by Chief of Staff Lieutenant General Ahmed Gaïd Salah to Ain Ouessara Air Base in the 1st Military Region on 30 October.

The footage released to Algerian television showed Lt Gen Salah inspecting CASC CH-4 and CH-3 UAVs in a hangar, and also during taking off and in flight. Although both UAVs were unarmed, however, the CH-4 and CH-3 are both capable of carrying various types of munitions especially the AR-1 Precision Guided Missile (PGM) used extensively by many countries in Africa.

The acquisition of this type of Unmanned Combat Aerial Vehicle (UCAV) makes Algeria one of the few African countries to deploy armed drones in combat, behind Nigeria and Egypt.

The CASC CH-3 is a fixed-wing UCAV of the Rainbow series which spots an unusual canard layout, and a wing-mounted rudder system. In January 2015, a Nigerian Air Force CH-3 drone was reported to have crashed in the north of Nigeria, while conducting an airstrike against the Islamic militant group Boko Haram.

The CASC CH-4 on the other hand is one of the largest fixed-wing UCAV of the Rainbow series, Aesthetically similar to the General Atomics MQ-9 Reaper, and the only distinct visual difference between two UAVs is that the ventral fin below the V-tail on MQ-9 which is absent on CH-4.

Both can be armed with a similar plethora of weapons.

The Algerian Air Force CASC CH-3 and CH-4 were acquired for precision airstrike mission in the ongoing counter-terrorism operations in the country.